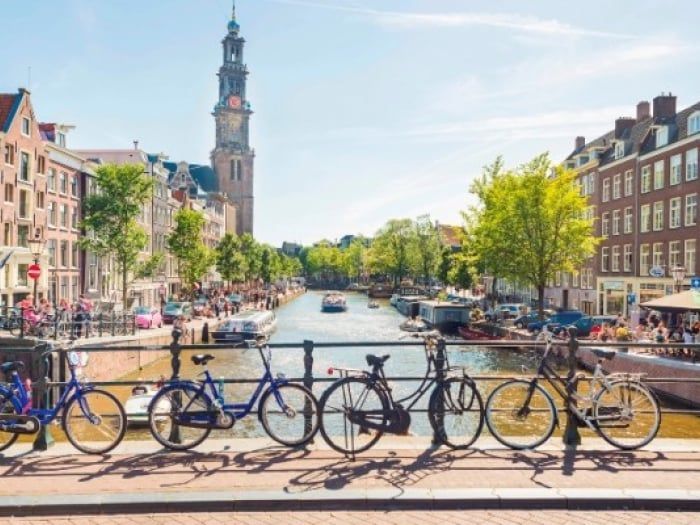 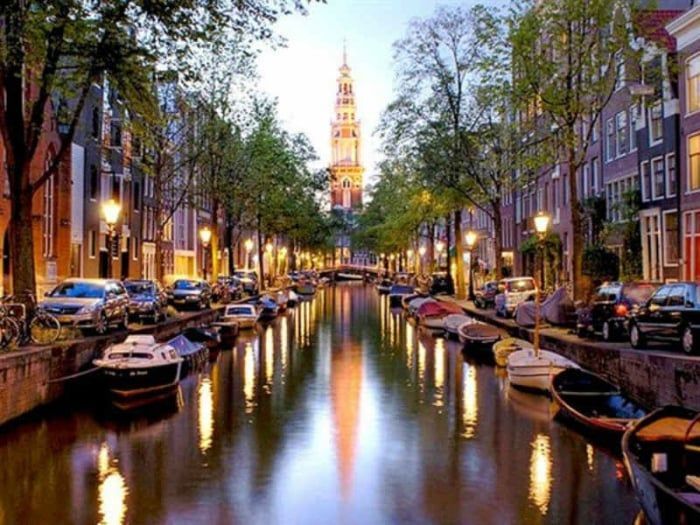 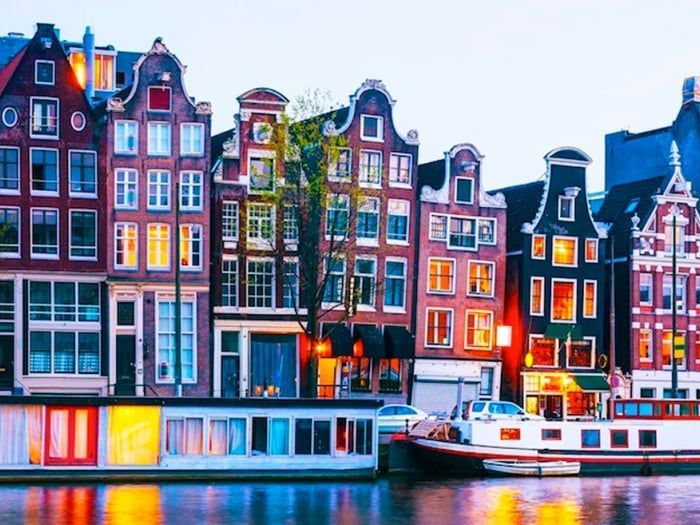 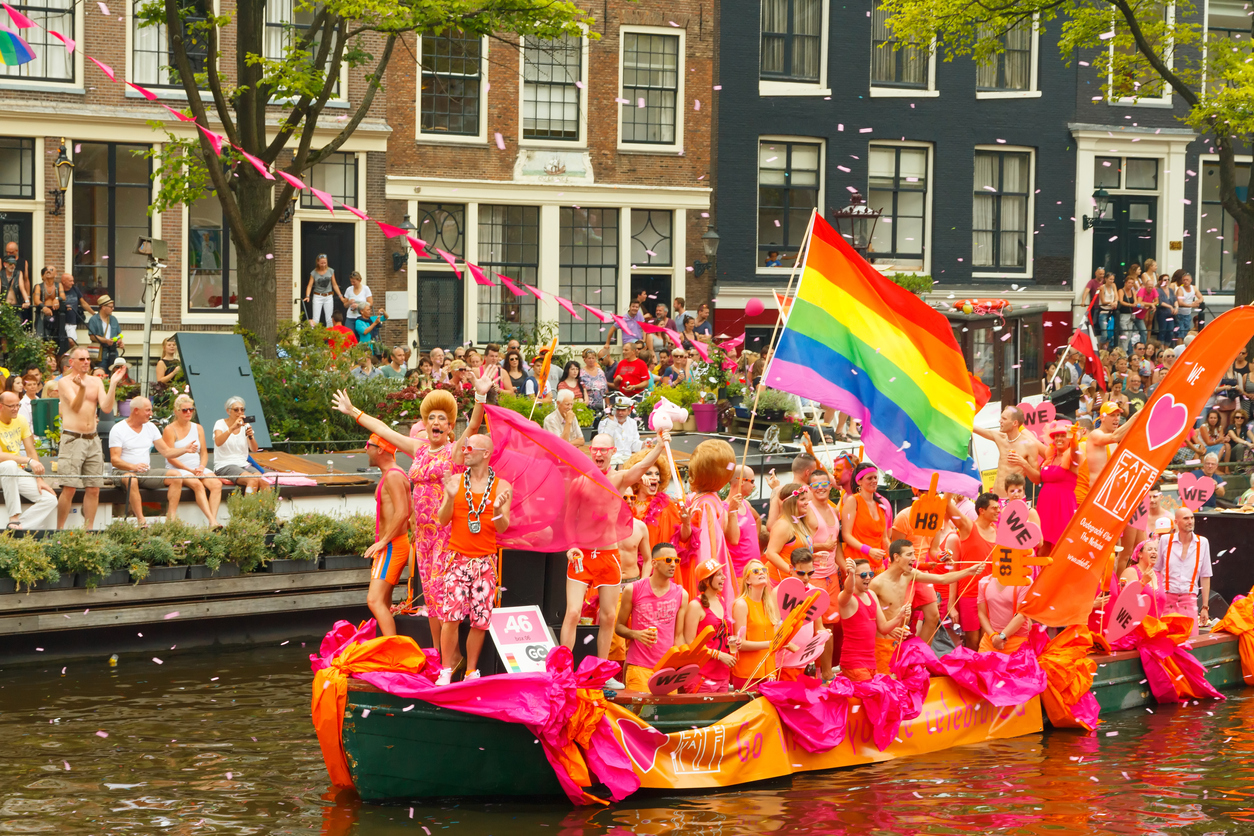 A city famous for the cafes, canals and red-light district.

Amsterdam is the capital of the Netherlands and has a popular of almost 900,000. The name of the city derives from word Amstelredamme which was a dam in the river Amstel. Originating as a small fishing village in the late 12th century the city became an important port.

Famous Amsterdam residents include the diarist Anne Frank, artists Rembrandt van Rijn and Vincent van Gogh. The house where Anne Frank lived is a tourist attraction and pictures from Rembrandt and van Goth are on display in the Rijksmuseum.

Amsterdam tourism was based on the red-light district and its many cannabis coffee shops but more recently the city has been working to change the image of the city and attract a different type of tourist. The canals are also an attraction for many tourists as only Venice in Italy is a city surrounded by water.

Amsterdam was considered the gay capital of Europe for many years due to the liberal atmosphere compared to most other European cities however this is no longer the case as other cities have adopt the similar attitudes and society has become more open minded.

Amsterdam is small and compact and therefore many of the places you want to visit you can walk or take a tram. You can buy a strip card which is a ticket for 5 or 10 trips on tram.

Amsterdam as one airport called Schiphol and there are direct trains to Central station which is the main railway station of Amsterdam. The taxis from the Airport to the centre are quite expensive as they have a high tariff and will cost around €40

Most of the hotels in Amsterdam are within easy walking distance of the centre of town and either of the 2 area of the city popular with the gay community.

There are a few gay owned guest houses in the gay neighbourhood and a number of gay friendly hotels. All the places to stay on our website are exclusively gay or gay friendly. For the main gay events it advisable to book in advance as the city is relatively small and all places to stay can become sold out in advance. The two different area of the city attract different type of gays.

The street Reguliersdwarsstraat is where the mainstream gay community generally hang out or those that are not into cruise bars or fetish gear.

There are of Warmoesstraat is where the gay cruise and fetish bars are located which is close to the red-light district.

Generally, look for somewhere to stay in the centre of the city rather than the outskirts and you can walk almost everywhere you need to get to except back to the airport.

Amsterdam is a city full of different neighbourhoods and each one has something different of the other. The city is very diverse which make the city interesting. It could be the markets, museums, culture of the inhabitants or lot of other reasons so generally other than visiting the 3 below main tourist attractions just explore the city on foots to see how diversity of the city’s different neighbourhoods.

The canals were created in the 17th century to keep the sea from flooding the city. The canal as UNESCO and a canal boat trip is a relaxing way to see the city. Floating along the canals by guided boat tour you will see parts of the city you are unlikely to discover on foot.

The Anne Frank house on Prinsengracht is interesting place to visit, All the history surrounding the atrocities committed against the Jewish people during World War II were captured by the diarist Anne Frank and her family as they hid from the Nazis for two years.

No trip to Amsterdam could be complete without visiting the Rijksmuseum to see the paintings of the famous Dutch artists. The modern building is on Museumplein is houses over 1,000 drawings and letters.

The city of Amsterdam gay scene is split into 2 areas of the city Reguliersdwarsstraat is where you will find the more mainstream bars and clubs which are most from Thursday to Sunday. The most popular gay hangouts in the part of the city are those listed below.

Soho is an English-style gay bar. It a good place to go for drink before or after dinner or pre clubbing. They have DJS are weekends and is generally busy all week except Monday and Tuesday when is normally closed.

Taboo has an outdoor terrace, large smoking area and a large selection of drinks available and offers free Wi-Fi. They have a happy hour to tempt you earlier in the evening.

Café Montmartre is one of the oldest gay bars in Amsterdam and has a typical Dutch atmosphere. The music is from the 80’s & 90’s and Dutch pop. Happy hour from 6pm-8pm and generally packed with a mixed crowd. A friendly place to visit to experience Dutch gay culture.

Exit Café is a relatively small popular gay dance bar & café that plays a great selection of house music every day of the week. Popular with younger gays.

The other gay area of the city is Warmoesstraat close to the red-light district and where the gay cruise and fetish bars are located. The most popular gay hangouts in the part of the city are those listed below

Spijker is a traditional gay bar with a pub like atmosphere that attracts a local ‘jeans’ crowd. Spijker features a pool table, a fireplace and darkroom. It gets very busy at weekends after midnight. Free Wi-Fi.

The Queen’s Head is a friendly gay bar, owned by a drag queen and her partner. The Queen’s Head has a small terrace with a nice canal view. It has DJs at the weekend and popular with Dutch locals.

Amsterdam does not have a regular club scene like many other cities but there are several regular monthly parties. Club NYX is a 3-floor gay dance club on Reguliersdwarstsraat. Each floor offers a different style of music, and the focus is very much on a fun night out. Check NYX’s website for details of upcoming parties.

Rapido organises a party several times a year at various venues, although the brand is firmly established in the international scene with parties across Europe and beyond. They have good DJs and good stage shows with attractive dancers. The parties often sell out, so it’s a good idea to purchase your tickets early. Visit RAPIDO’s website or Facebook for full details of upcoming events.

BEAR-Necessity is a popular gay party for bears, cubs, otters and their friends. BEAR-Necessity takes place about 6 times a year, usually on a Saturday at Club Panama Amsterdam. Check their website for details about upcoming parties and venues.

The Dutch cuisine is not generally highly rated and therefore majority of visitors look for foreign food choices.

Club Church is one of the most popular gay cruise clubs in Amsterdam. Facilities at Church include a large bar, dance floor (with talented live DJ’s many nights of the week), private cabins, dark rooms and showers. Monthly themes include Kink, Naked, Underwear and others. Check their website for current events.

The Cuckoo’s Nest is a popular gay cruise club. Cuckoo’s Nest is a regular bar on the ground floor and the basement features a very large play area with a maze and private cabins. The action kicks off early in the afternoon and then gets busy after work and in the late evening.

The Web is one of best-known leather & jeans cruise clubs and gay pickup bars in the city. It opens early and gets busy after work and early in the evening. The play area is upstairs and features a dark room, 10 cabins and a room with a sling.

Dirty Dicks is one of the city’s oldest gay fetish institutions. This darkened, sleazy gay cruise bar has two floors featuring a bar, dark room, smoker’s lounge, cabins, cubicles, bathtub, play zone. Their weekly parties are legendary for having some of the themes. Check the website for full details.

EAGLE Amsterdam is one of the city’s oldest gay leather/denim bars with 3 floors of fun, with cruising area on the 2nd floor and dark room in the basement. There is a dance floor, smoking room and lounge area. Very cruisy and crowded at weekends. Check the website for current themed parties.

The main LGBT events in Amsterdam are the Bear Weekend, King's Day on the 26th/27th of April and Amsterdam Gay Pride with the canal parade in August.