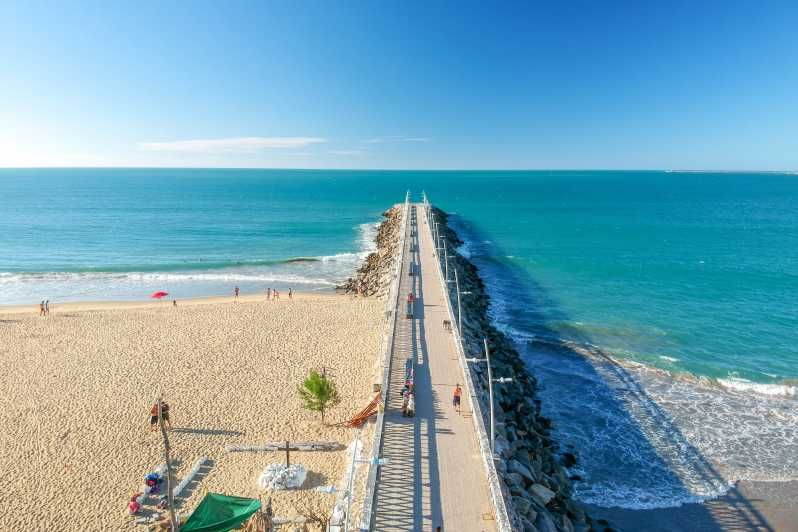 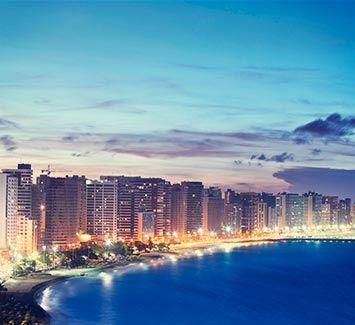 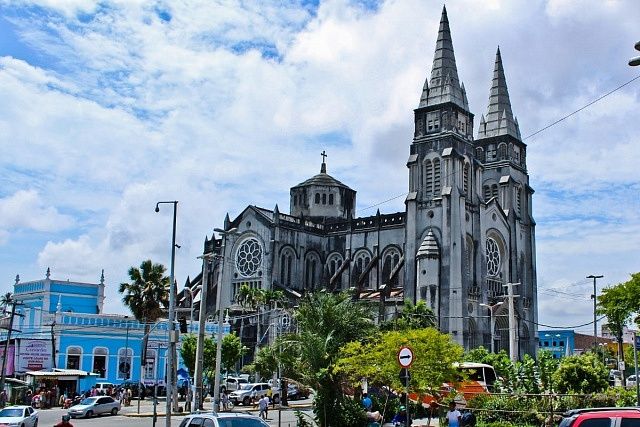 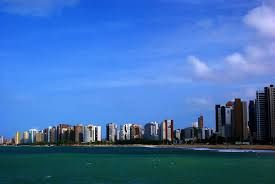 Fortaleza. capital of the north eastern Brazilian state of Ceara known for its beaches,

Fortaleza was founded in 1726, became the capital in 1799, when Ceara created a state capital. The cites name refers to the Schoonenborch fortress, built by the Dutch between 1649 and 1654.

An important tourist, commercial and financial centre and one of the three most important cities in the Northeast region of Brazil, along with Recife and Salvador and seventh richest city in Brazil.

The city located on the coast of the state, with 34 km of beaches and 21 meters above sea level.

Fortaleza is the closest Brazilian capital to Europe, approximately 5,608 km from Lisbon, Portugal with short flight of 7 hours.

Lesbian, gay, bisexual, transgender and queer (LGBTQ) rights in Brazil are among the most advanced in Latin America and the world.

Gay couples in Brazil enjoy the same rights guaranteed to heterosexual ones since 16 May 2013, including marriage. In June 2019, the Brazilian Supreme Court ruled that discrimination on the basis of sexual orientation and gender identity is a crime the same as racism.

The status of LGBTQ rights in Brazil has grown since the end of the military dictatorship in 1985, and the creation of the new Constitution of Brazil of 1988.

Generally, with the world’s largest gay pride event in Sao Paulo and carnival which is popular in every city the Brazilian popular are generally open minded towards LGBTQ community.

Pinto Martins International Airport (FOR) in Fortaleza is located about 14km south of Avenida Beira-Mar in the city centre. Fortaleza Airport is the main airport in Brazil’s state of Ceara.

The executive bus 917 is relatively new route that goes through Fortaleza’s city centre was created to serve tourists visiting Fortaleza and ideal if you are staying close to Avenida Beira Mar. The service runs from 6.30 am to 10.30 pm, with buses leaving every hour.

There is also a regular bus that you can take to reach the city centre. Bus 404 connects the airport to Fortaleza’s main bus station (Rodoviária) from where you can go virtually to anywhere in the city. This service runs frequently, every 15 minutes or so.

There are two taxis options available outside the airport, both white. Fortaleza Airport Taxis operated by Coopaero are more expensive but have fixed prices and can be booked at desks in the arrival's hall. Regular taxis operated by Coopertáxi use meters, and may be slightly cheaper depending on the time of day or traffic. Uber operated in Fortaleza as well.

Most tourists visiting Fortaleza will not go more than 5/10 blocks from the sea, except to return to the airport or visit a shopping mall.

By subway there is the metro with 2 lines operation in the directions of south and west of city.

Like all the major Brazilian city’s, Fortaleza has a bus network and there are e nine bus terminals. Most bus routes run 7 days a week from 5:00 am -23:00 pm.

The Beira Mar (translation Sea Side) in city has police stands and patrols making it fairly safe around the clock. If going out at night if not accompanied by a local Brazilian friend the it is advisable to use a taxi.

Before deciding what is the best place to stay in Fortaleza you first need to define which region you would prefer to stay in. In the case you want to stay in a urban area of the city, with bars and restaurants nearby and to be able to walk to the arts and crafts fair at night, then it is recommended to book a hotel at Beira-mar Avenue.

If you would prefer to stay in a less crowded area then choose Futuro Beach.

If your ideal place to stay is in a resort or at a beachfront hotel, there are amazing places around 30 Km away from Fortaleza like Porto das Dunas (near Beach Park), Iguape or Cumbuco Beach.

Centro Dragão do Mar de Arte e Cultura is the stylish and historic cultural centre. There are exhibitions, theatre, cinema, planetarium and library open to display various arts and cultures as well as urban leisure.

Praia de Iracema is a nice beach that boasts the State Public Library of Ceara, the Ceara Aquarium, the Caixa Cultural de Fortaleza, the reputable Joaquim Nabuco Foundation and much more. Stroll over the Pier of Iracema Beach, the Street of Tabajaras and other interesting streets in the neighbourhood.

Praca dos Martires (Martyrs' Square) is home to some of the most natural and serene attractions. Stroll along the 3rd Corridor of the Public Promenade which ushers you into the Centennial Baoba. Experience the calming ambiance whilst enjoying the cafes and restaurants to savour tasty local cuisine.

Theatro José de Alencar with the historic architecture, designed by Fausto Nilo and Delberg Ponce De Leon, contrasts with houses built at the beginning of the 20th century. These beautiful buildings are among perfectly landscaped grounds.

Praia do Futuro is considered the ultimate 'beach of the future'. Swim and bathe in the waters of this unique beach that are free from corals and reefs next to the shore. Praia do Futuro offers customers much more than a typical beach experience. Indulge in the excellent cuisine, sip on some great wine in the rustic restaurants.

Barraca do Joca is considered a gay beach area with bar, cafes and restaurant popular to hang out like a local. The beach area is less commercial with good service of staff and local beach sellers of local foods and drinks. Take a taxi there and back as not an area to stay but great to spend the day topping up your tan and hanging out with locals and foreigners in the know.

In Fortaleza there is a huge choice in the tourist area of all different types of international and local cuisine. There are a few which are more typical drink or food popular in the state of Ceara.

Guarana juice with peanuts and chestnuts is a favour drink of the local but you will have lots of choice of different fruits you can combine at the local juice huts serving typical combinations or one you can select.

Baiao de dois is a dish originating from the Brazilian state of Ceara, that consists of a preparation of rice and beans, preferably Brazilian beans such as "feijão verde" or "feijão novo".

Amsterdam C is a bar with Music, DJs, lively people and good drinks in the heart of Praia de Iracema. Address:R. José Avelino, 349.

If you go to Barraca do Joca look for flyers and ask staff or locals for tips on any parties happening during your stay.

Rommeo is a large gay sauna with private rooms, cabins, a large steam room, dry sauna, dark rooms, a solarium, cinema and even a club. The club is open most days and there are DJs and go go boys to entertain you. Rommeo is open 24 hours a day. Address:Rua Meton De Alencar 622.

Dragon Cruising Bar is a gay sauna with a bar, restaurant, pool, solarium, suites, cabins, dark rooms and an outdoor area. They offer a range of massage and wellness treatments, such as shiatsu and reflexology. This is a good place to relax and unwind in a clean safe environment with locals and foreigners. 50% discount offered to airline staff. Address:Rua Almirante Jaceguai, 239.

Carnival in Brazil is popular with most Brazilians held annually at the end of February or early March depending on the dates for Easter is popular with the LGBTQ community.

The Parade of Sexual Diversity in Fortaleza typically take place toward the end of June and a popular event with locals and foreigners visiting the city for a beach holiday when event is held.