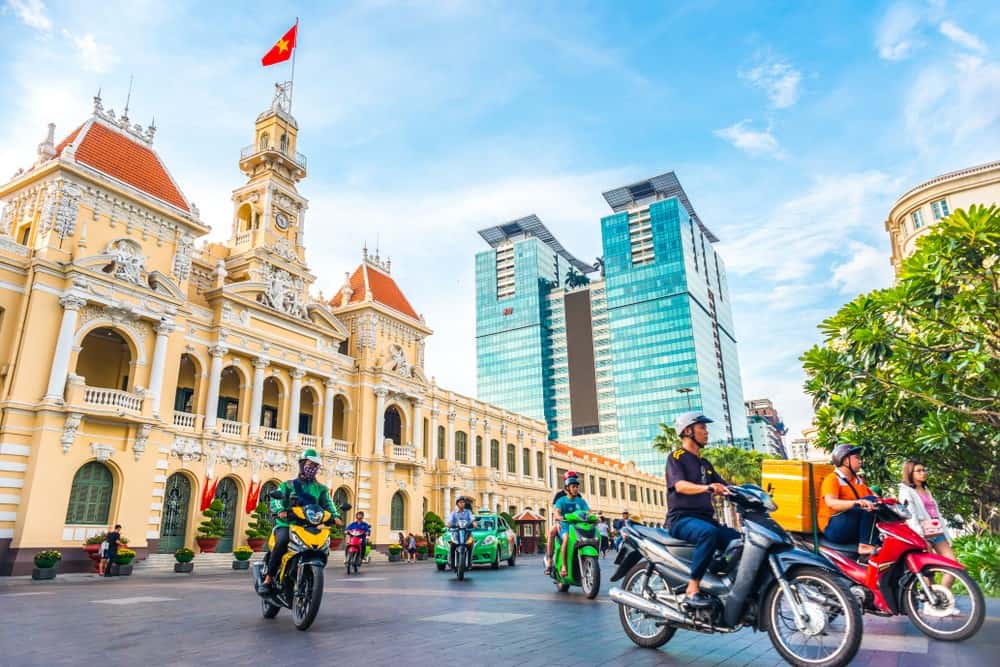 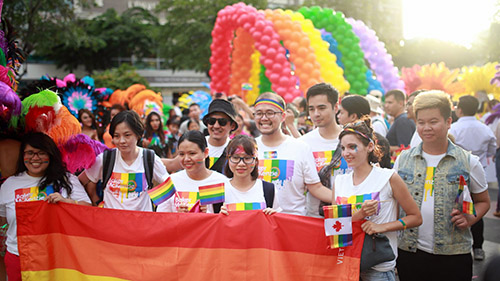 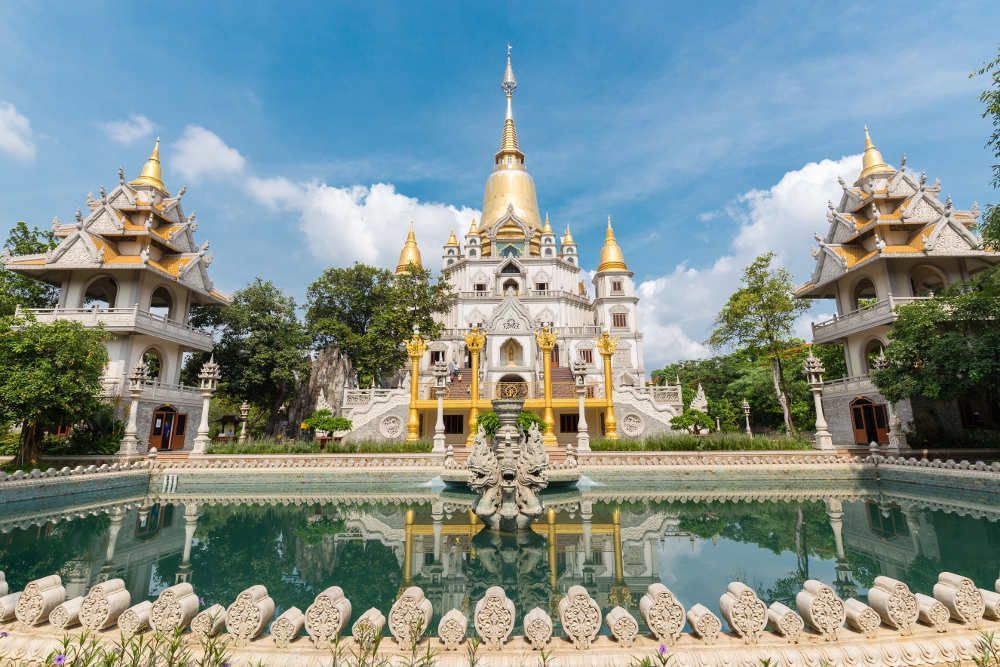 Formerly known as Saigon, Ho Chi Minh City was first proclaimed in 1946, and later adopted in 1976.

Ho Chi Minh City is a high energy city with a commerce, culture, food and vitality and small but vibrant gay scene.

The city is filled with the legacy of Saigon, from the old-fashioned street food markets and back alleys of the city to the grandiose colonial buildings and museums. This city with has fast pace with all the shopping malls, restaurants, skyscrapers, and vibrant nightlife brought together.

Ho Chi Minh is the biggest gay hub in the country. While not exactly a gay destination, the gay bars, clubs, and events in town add to the city’s energy. There’s a friendly local LGBTQ scene that meets in popular gay and gay-owned bars. You’ll also find some exceptional gay saunas here, offering everything from beautiful traditional Vietnamese gardens to rowdy themed parties.

There is a relaxed attitude to the LGBTQ community, and gay travellers are unlikely to experience any issues or discrimination.

Vietnam has never had any anti-gay laws and although gay marriage is not yet recognized, the outright ban on it was lifted in 2015.

That said, many Vietnamese, especially in older generations, maintain conservative attitudes towards the LGBTQ community. It is not easy for locals to come out, and therefore many remain in the closet or keep their gay life very low-key.

The only thing you really need to keep in mind is overt displays of affection are considered extremely rude, even between straight couples.

The city is served by Tân Sơn Nhất International Airport approximately 8km from city centre. There are 2 different travel options to get from Ho Chi Minh City airport to downtown.

The government operated green public buses between the airport and the city centre run from 5.45am every 12 - 18 minutes and take about 55 minutes. Not all staff speak English and you need to pay extra for your luggage.

The yellow shuttle buses are privately owned with 2 routes and English-speaking staff. Operating from 0.00am -23.45pm, departing every 25- 30 minute, and taking approximately 65 minutes.

You can take a taxi which will take approximately 20 minutes depending on traffic.

Bus travel is a popular and affordable way to get to Ho Chi Minh city.

Taxis are available in most areas and you should negotiate the fee with the taxi drivers.

Grab, Gojek and Be are taxi bikes using an app like Uber for the more adventurous.

In the heart of the city, District 1 is the most popular place for visitors to stay, as home to a majority of the city's nightlife and tourist attractions. Staying in District 1 put you in the centre of city.

The atmospheric 19th-century Thiên Hau Temple is in Ho Chi Minh City's Chinatown (ChoLon) and one of the oldest Chinese temples in the city. Dedicated to the Lady of the Sea, Thiên Hau, this temple is visited by local worshippers. With clouds of incense in the air, candles flicker on altars, and shafts of sunlight pierce through the partial roof as you enter the green wrought-iron gates across a small courtyard.

Whilst visiting China Town, you should stop by the hectic Binh Tay Market, with stalls piled high with everything from local delicacies, fish, flowers, and tropical fruits to shoes, clothes, colourful candy, and souvenirs. The markets are known, as area for pickpockets, so make sure any valuables are secure and out of sight.

After soaking up the market’s ambiance, head to Saigon Square, which is about three-minute walk away, for a slightly less frenetic shopping experience. Here, you'll find fantastic deals for shopping with haggling on price being customary.

Notre Dame Cathedral Basilica of Saigon is an example of Neo-Romanesque architecture, the red-brick Notre Dame Cathedral is a distinctive landmark in the heart of city. Built between 1877 and 1883, the cathedral was intended to be a place for the colonial missions to worship and a symbol of the power of the French colony.

Across the street, is the French colonial-style post office, completed in 1891, and designed by Gustave Eiffel, the French architect of the Eiffel Tower.

Saigon Opera House, also known as The Municipal Theatre of Ho Chi Minh City, is located at the start of the famous tree-lined Le Loi Avenue. It was built as Opera de Saigon in 1897 by Eugene Ferret, a French architect, to entertain French colonists, with a striking facade in the style of the Petit Palais, which was built in the same year in Paris.

A visit to the Reunification Palace, once known as Independence Palace, that for locals represents this historic event and the reunification of the country.

Set on 44 acres of lush lawns and gardens, the palace also offers a fascinating glimpse at the lifestyle of privileged heads of state in 1960s Saigon. You'll see some military vehicles outside, a fighter jet that destroyed the Norodom Palace, and tank 843, which rammed through the palace gate in April more than four decades ago.

Jade Emperor Pagoda (Chua Phuoc Hai), built in the early 20th century, sits in a quite neighbourhood a few blocks away from the Botanical Gardens. The temple was built to honour the Taoist god, the Jade Emperor or King of Heaven, Ngoc Hoang, and within its dimly lit interior, you'll see many representations of both Buddhist and Taoist deities.

At the temple's entrance, masses of turtle’s swim in a pond, some with inscriptions on their shells, and for this reason, the temple is often called the tortoise pagoda.

There is not an official gay neighbourhood in Ho Chi Minh City, but most of the LGBTQ hangouts can be found in and around District 1, which is also the most touristic area.

There are only a few true gays bar in Ho Chi Minh City, but a few other LGBTQ friendly hangouts and some regular monthly gay parties!

Thi Bar located in the Bui Vien backpacker's area, owned and run by a French-Vietnamese gay couple. It attracts a mixed crowd who come to enjoy the live music. Friday and Saturday are the main gay nights. Located at 224 De Tham Street and open daily except Tuesdays until late.

Frolic is a new gay bar that attracts a mixed LGBTQ crowd as well as backpackers, giving it a very open minded and accepting vibe. The Disco Nights on Saturdays are popular as well as other themed nights during the week. Located at 63 De Tham, Q1, and open weekdays until around 2am and 6am at weekends.

Papa Cafe is a restaurant\bar that become a gay hangout in the evenings, particularly at weekends. The karaoke nights are extremely popular with Vietnamese gay guys belting out their live Diva tunes! Upstairs is a cool chill-out lounge area to hang out with friends. Papa Cafe is open every day from 7 am-midnight.

Poc Poc is a local pub famous for its beers and hosting themed drag shows at weekend that attract a very mixed LGBTQ crowd at the weekends. Poc Poc Beer Garden is located at 79A Nguyễn Đình Chiểu, Phường Võ Thị Sáu and is open daily until around 2am.

Republic Lounge is one of the most popular gay venues in city. Busy from around 11 pm or midnight. On Wednesdays they have “Boys Nights”, on Friday evenings they have hilarious drag shows. Serving excellent cocktails. Republic is located at 75 hồ Tùng Mậu d1 and open Wednesday to Sunday till late.

Ho Chi Minh City has an abundance of great restaurants serving cuisine from around the world, particularly Chinese, French, and Vietnamese.

The different food markets are great place to eat with dozens of food stalls.

Ben Thanh Street Food Market is one of the best in the city, offering dozens of food stalls service a huge choice of foods in a covered area with bench tables.

Gay Sauna and Gay Spa in Ho Chi Minh are hard to tell apart, and many offer both services. There are a surprising large number of male-only spas and saunas in Saigon.

NaDam Spa one of the biggest and most well-known gay saunas with stunning Vietnamese architecture. There are wooden walkways above a pond filled with koi fish and numerous leafy plants. Facilities include a steam room, dry sauna, a wet area with rain showers, and two bathing pools, one with Jacuzzi jets and massage fountains. Located at QL13, Hiep Binh Chanh Ward and open every day from midday until 10pm.

The Sixty-nine Zone is a popular gay sauna that holds regular themed days. Spread over two floors there's a sauna, steam room, Jacuzzi, and even a private play space called “The Tiger Cage Area” Located at 39/3 Pham Ngoc Thach Street and open every day from 11am - 11pm.

De.soi9 is not a typical sauna. The place feels more like a beer garden. There's a steam room, sauna, cinema, Jacuzzi, and private cabins, as well as a nice rooftop where you can laze in the sun. Located at 24 Dinh Tien Hoang Street and open daily from 1pm - 10 pm.

3 Some Spa is a newish gay spa that specializes in traditional Vietnamese massages. There is sauna, Jacuzzi, and titanium salt bath to enjoy. They offer free water, herbal tea, coffee, and fruit. Located at 29/6 Nguyen Binh Khiem St and open from 11.30am - 11.30pm.

Nadam Spa as one of the biggest and most well-known gay saunas popular with locals, expats, and tourists. Nadam is one of the best spas for men in Vietnam with a fabulous reputation and stunning design, housed in a beautiful imperial palace with ancient brick and wood. There is a dry sauna, steam room, dark room and large jacuzzi, as well as massages, facials and other treatment options available. Located at 66 Street 16, Hiep Binh Chanh Ward, Thu Duc and open Tuesday to Sunday from 2pm – 10pm.

Ho Chi Minh is full of shopping malls and markets. No area is best for shopping as the choice is enormous.

Viet Pride held in August is the only main LGBTQ event held in Ho Chi Minh. A large parade marches down Nguyen Street with thousands of participants waving rainbow flags.