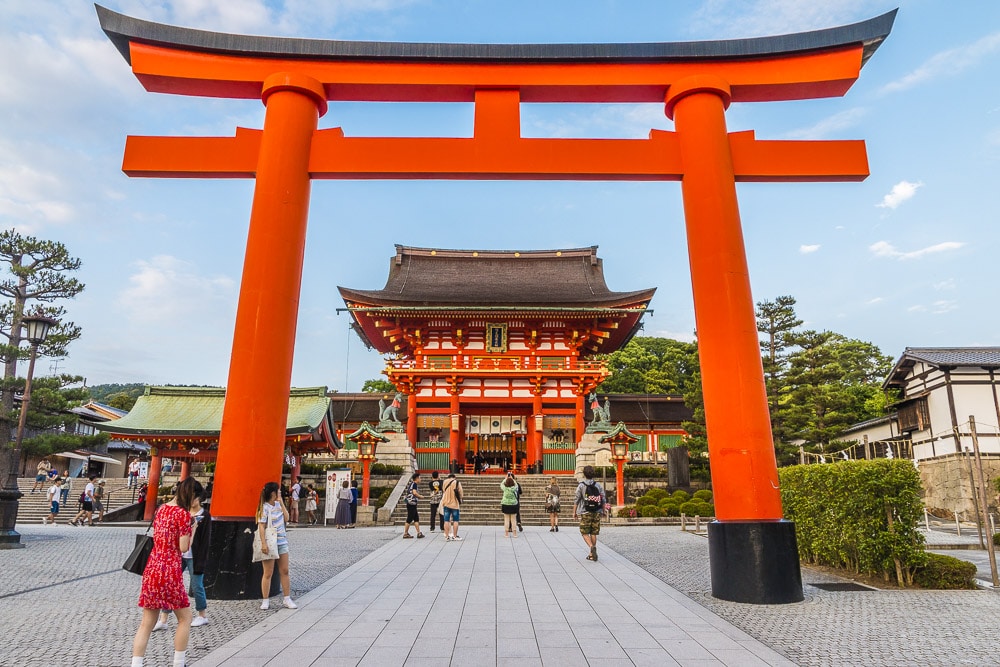 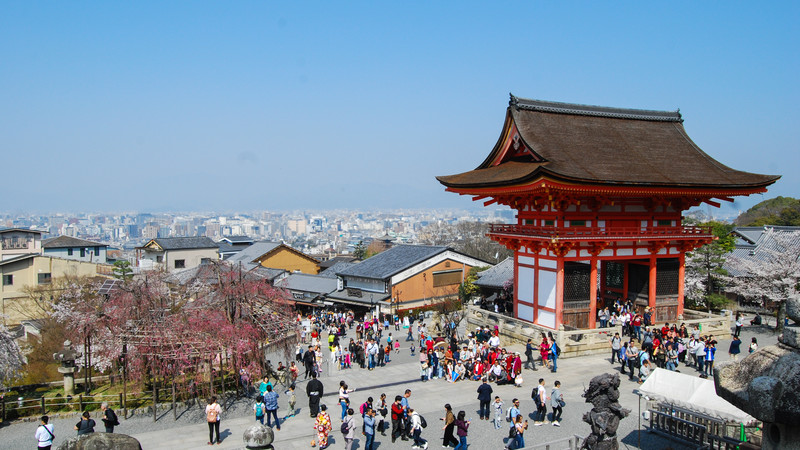 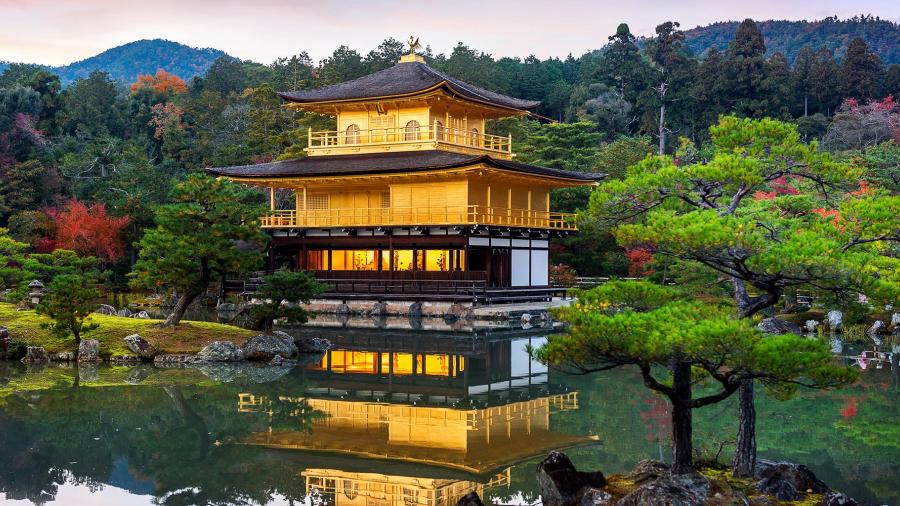 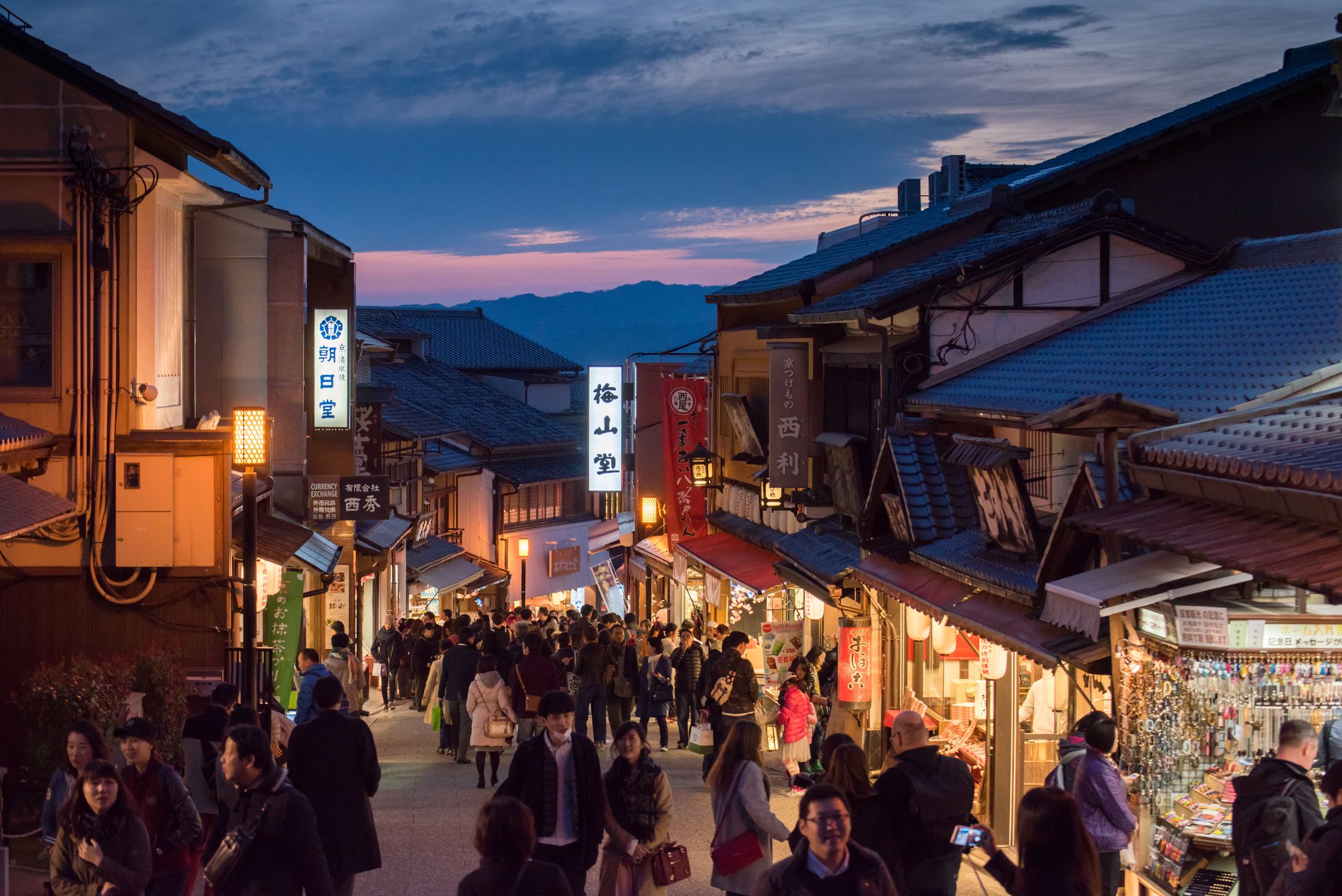 Kyoto, the ancient heart of Japan renowned for its temples, ancient traditions, mysterious geisha and more conservative attitudes. It is home to numerous Buddhist temples, Shinto shrines, palaces and gardens, many of which have been designated collectively as a World Heritage Site by UNESCO.

Kyoto functioned as Japan’s capital and the emperor’s residence for over a thousand years until 1868 when it was moved to Tokyo. Today, Kyoto remains one of the country’s largest cities. Kyoto today is a city home to many of Japan historically structures.

In terms of LGBTQ rights, Japan has a long way to go. By Asian standards, it is easily one of the most gay-friendly Asian countries, but LGBTQ rights need to improve significantly to same level as Europe or the Americas.

The closest airport to Kyoto is Osaka International Airport (ITM Itami Airport), about 36 kilometres from the city. A train takes approximately 45 minutes with departures every 30 minutes.

Kansai International Airport (KIX): The main international access point to Kyoto – about 90 minutes from Kyoto by direct express train. The JR Haruka Limited Express train departs every 30 minutes and operates from 6:30am to 22:15pm.

Downtown Kyoto is the best place in the city to stay as you'll be within walking distance of hundreds of restaurants, shop and bars, as well as both of the city's subway lines and two train lines.

Kyoto continues to play an important role in Japanese religion, with 30 of the city's temples still serving as centres of various Buddhist sects, along with some 200 Shinto shrines within the city limits. In total UNESCO World Heritage site status has been awarded 17 historic buildings in Kyoto.

Nijo Castle was built in 1603 and is complete with well-preserved walls, towers and a moat. The complex has several buildings containing many works of art, and is famous as the location chosen by the emperor to issue the rescript abolishing the country's once powerful Shogunate.

The site's most important building is Ninomaru Palace which consists of five separate buildings linked by corridors. These buildings interiors are decorated with many famous artist paintings.

Kinkaku-ji (The Golden Pavilion) was originally built in the 14th century as a retirement villa for Shogun Ashikaga Yoshimitsu and is now a Zen Buddhist temple. This magnificent Golden Pavilion (Kinkaku-ji) is one of Kyoto's most picturesque tourist attractions.

In the east side of the city is the Kiyomizu-dera Temple, an important UNESCO World Heritage Site, lies in a picturesque location on Otowa Mountain overlooking the city. Visitors can enjoy a delightful stroll to the temple along a quaint lane with lots of small shops and craft stores. This beautiful temple was founded in AD 790 and dedicated to the 11-headed Kannon, the Buddhist Goddess of Mercy whose statue can be seen here.

Sanjūsangen-dō (Rengyoin Temple), or the Temple of the 33 Niches, takes its name from its unusual structure: its façade is divided into 33 (sanjusan) niches to reflect the belief that Kannon, the Goddess of Mercy, could take on 33 different personifications.

Kyoto Imperial Palace (Kyoto-gosho), was originally built in AD 794 but replaced several times after being destroyed by fire. It is one of the most visited historic sites.

Gion's Geishas and Temples is famous in the geisha district. Located on the eastern bank of the Kamogawa River, Gion is a mix of modern architecture and historical beauty that provides a taste of numerous Japanese traditions, from the elaborately dressed geishas to well-preserved 17th-century restaurants and teahouses offering a glimpse of old Japan.

Kyoto Tower whilst most of the other sites are steeped in ancient history, is the 131 metre tallest structure in the city. It features a viewing platform at 100 meters, which has one of the very best views of the whole Kyoto. If the weather is clear, you can even see as far as Osaka. The rest of the tower includes offices, restaurants, shops, and a hotel. Kyoto Tower is across the street from Kyoto Station.

Where to Stay in Kyoto

Sadly, there isn’t a proper gay area in Kyoto although the Pontocho neighbourhood with vibrant bars, clubs, and restaurants could be consider the location. Kyoto’s nightlife does have lots to offer, especially on the club scene. But if you are looking for a chilled/laid-back night, then these bars are the perfect shout.

Azure is a fun gay bar in Kyoto, especially on weekends, on the picturesque street of Kiyamachi Dori and foreigner-friendly. Unlike many bars in Japan, you don’t need a membership to enter this charming, intimate joint, which is exclusively for men. It is quite small serving cocktails, beers, wines, and tequila. The bar staff are cute. Azure is open daily until 4am

Apple is a gay bar with free karaoke which is tucked away on the third floor of an office building. This gay bar is men only, has a wide range of drinks, and best of all, has free karaoke which can be fun if you want to sing to an audience. Apple is open Tuesday – Sunday until 4am

Kitsune is a fun and gay friendly club set in the beating heart of Pontocho, Kyoto’s trendiest neighbourhood. The gay friendly club is two floors, with two themes: Land and Sea. The clever use of neon lighting and glossy décor makes you feel as if you are dancing in a video game. There is lots of seating spaces around the dancefloor. On weekends, students can get drink discounts, which makes it popular with the younger crowds.  Kitsune is open daily until 4am, until 5am on Friday and Saturday

On the last Friday of every month, Kyoto’s Club Metro hosts the spectacular drag night Diamonds Are Forever. “Club Metro isn’t exactly a gay nightclub; however, their monthly drag night is considered the unofficial gay party of Kyoto by locals,” An entrance fee is charged which includes one free drink ticket and if you’re a student or a foreigner, two free drink tickets are given.

Bell Kyoto, located close to Kamo River, is a modern gay bar. The minimal, contemporary decor and cheap cocktails, make this a great spot for a stylish and affordable night out. The charge an entrance fee and straight men and women must be accompanied by a gay man to enter.

There is a huge choice of Asian food in Kyoto but there are 2 experiences which are unique to Asia which you might like to try.

In the Gion district, it may be interesting to try a traditional tea ceremony. The Japanese tea ceremony is a centuries-old tradition. It involves preparing and drinking green tea in a special, celebrated way. The tea ceremonies are meant to make guests feel special and welcome. Tea ceremonies are often performed while sitting on the floor.

Tea originally came to Japan from China in the 8th century. Around the 14th century, tea-drinking parties became a form of socializing and a way for hosts to show off their knowledge about tea. The most formal tea ceremony lasts multiple hours, and usually starts with a kaiseki meal. However, the modern day, tea ceremonies are much shorter.

A host will prepare the tea in front of the guests. Before the tea is sipped, guests are supposed to eat a sweet treat. Then the tea is poured and sipped from a special tea bowl, all the while adhering to the proper placement of the bowl. It is a beautiful, historic experience, and Kyoto is one of the best places in Japan to learn about this important part of Japanese culture.

Japanese dining culture has a traditional of kaiseki meals. The kaiseki meal is a multi-course, meticulously prepared meal that is delicious as well as presented as a work of art. The purpose of kaiseki is to show the utmost hospitality, making guests feel that they are extremely special. Kyoto has many restaurants dedicated to the art of kaiseki.

The meals are always different, but include an appetizer, a simmered dish, a sashimi, something seasonal dish, a grilled course, and a dish with rice. Most kaiseki meals are served with guests sitting on the floor on tatami mats.

Kyoto's Gion district has many places to try a kaiseki meal. The meals tend to quite expensive as is like having a private chef cook a mill for you. It is a good idea to make reservations as these meals are the restaurants rarely accept client without a booking.

Kyoto is a great place to buy traditional and modern Japanese goods. Kyoto is compact and most of the shopping is located right downtown, all within walking distance of the main subway stations. There are two main shopping districts in Kyoto: The Kyoto Station area and Downtown Kyoto. Kyoto Station has a lot of shops right inside and underneath the station building, as well as some vast electronics and camera emporiums.

Downtown Kyoto has several large department stores, hundreds of smaller shops, the famous Nishiki Market and lots of cafes in the area.

Kansai Queer Film Festival is a gay film festival taking place in venues in Kyoto and Osaka in September. The films have cross genres and themes, with an open-minded belief that love is love with everybody welcome.

Kansai Rainbow Pride is the largest LGBTQ parade in Japan outside of Tokyo, taking place in nearby Osaka. The event aims to promote celebrate awareness and diversity with a parade, stage shows, parties, and fun activities in Ogimachi Park every year in October.