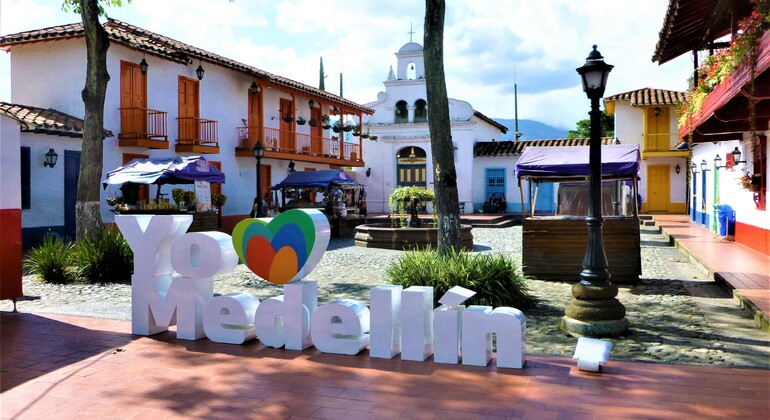 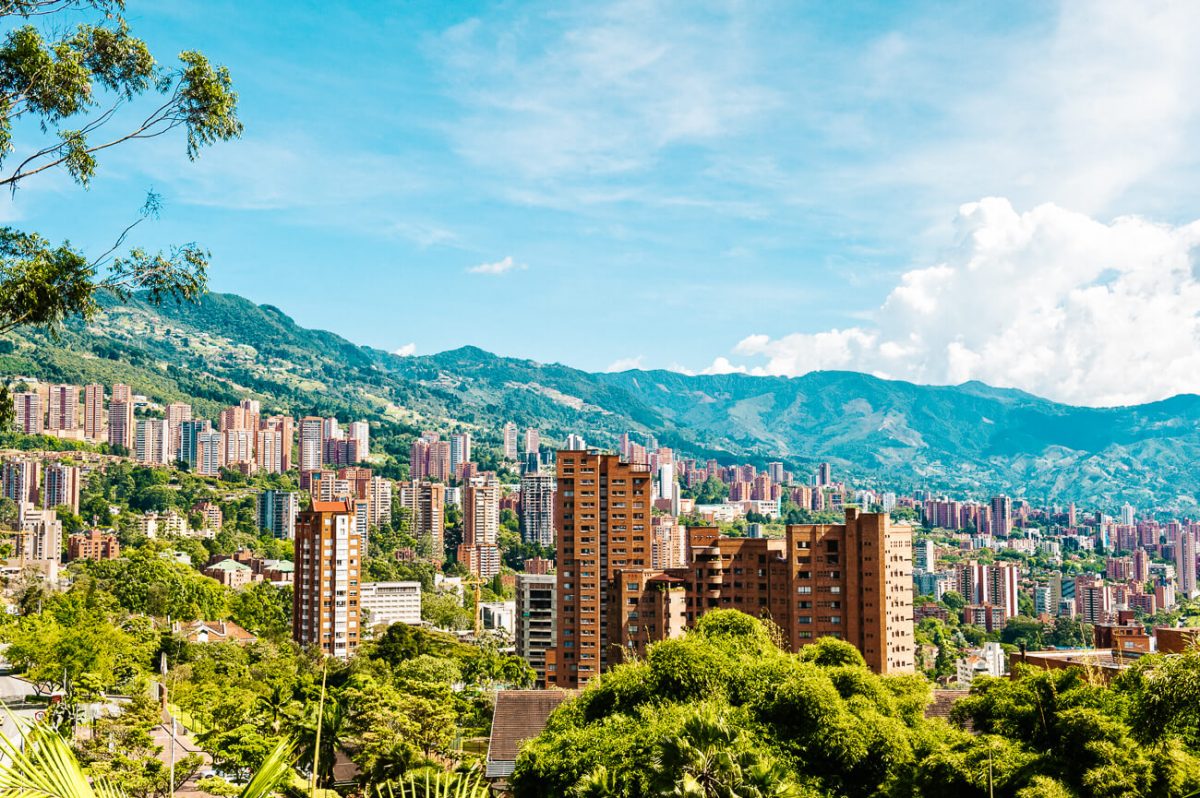 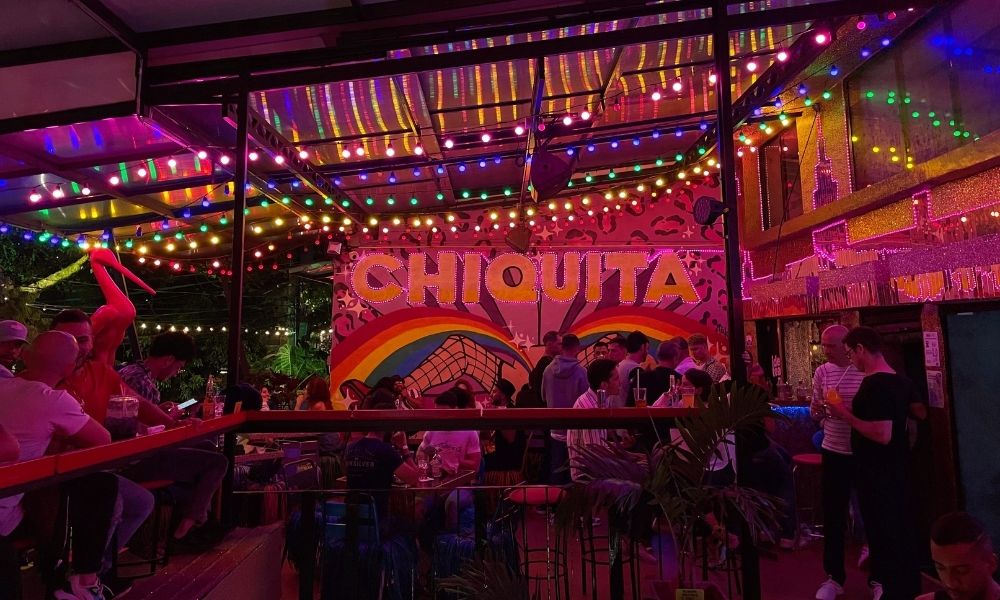 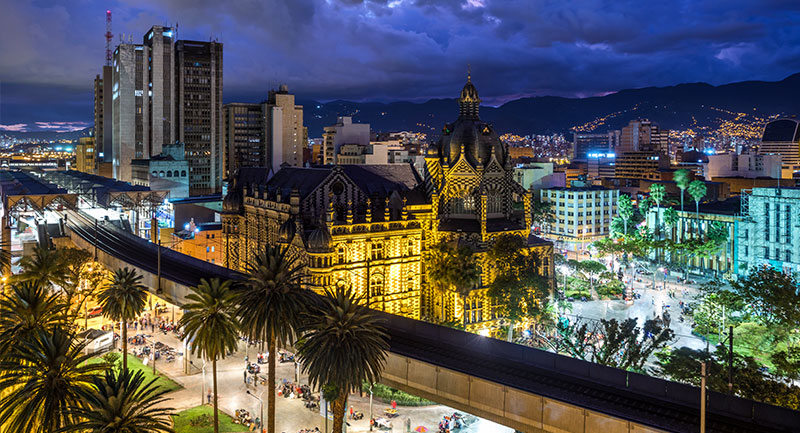 Medellín is the capital of Colombia’s mountainous Antioquia province.

Medellín, a city once marked by violence, drug trafficking and discrimination has now resurfaced to welcome openness and empathy as a result of the mayor of the city huge efforts to change the cities culture.

The city still a little rough around the edges in places, but has developed a reputation for innovation, social awareness, gastronomy and above all, being one of the most progressive cities in Latin America.

It is not advised to visit Medellin’s Calle del Pecado (The Street of Sin) no matter what as is extremely dangerous with drug dealers and pimps.

Being the second biggest city in Colombia, Medellin is a hub of LGBTQ life but still has a strong Catholic heritage.

In Medellín you will find the centre of gay life is in trendy El Poblado around the Parque Lleras.

Colombia has a growing gay scene and considered a leading Latin America country for LGBTQ rights.

Anti-discrimination laws were passed in 2011, adoption is allowed by both single and married couples, gays are allowed to openly serve in the army and in 2016, gay marriage was legalised. Colombia even has a law protecting your “right to express public affection in public” which is very progressive.

In terms of transgender rights, the right to change legal gender has for years been allowed in Colombia. In addition, Colombia allows a “neutral” or “blank space” for gender identity on birth certificates. Transgender people are also allowed to openly serve in the army.

The main gateway to Medellín for international and national travellers is Jose Maria Cordova International Airport (MDE) located 35 km from the city centre.

There are buses from the airport which leave approximately every 15 minutes and take you to either to San Diego Mall or to the city centre (“Centro”) of Medellin. Make sure to check with driver to confirm “San Diego” or “Centro” in order to confirm that you’re taking the right bus.

There are shared taxi (“colectivo”) from Medellin Airport to the city operated by the companies of the white taxis. This share taxi alternative is referred to as “colectivo” and you’ll basically share the taxi with up to 3 other people. These taxis leave once full and the final destination is San Diego Mall. The “colectivo” option is ideal if you’re travelling alone and limited luggage

From San Diego Mall you can then take a regular yellow cab or walk to the Metro station Exposiciones which is about 4 blocks away.

Some hotels\hostels can arrange a private taxi pick up or you can also use a ride-hailing app or take one of the white taxis you’ll see right at the exit. The regular yellow cabs are not allowed to pick up passengers at they are operating from the city centre municipality bringing passenger to the airport.

The metro is the main form of public transportation in Medellin.

Taxis are generally cheap and safe. It is advisable to if travelling further than a short trip to ask price to driver.

In Medellín the centre of gay life is in trendy El Poblado around the Parque Lleras. This is also the most expensive part of Medellin, so a more expensive part of the city for hotels or apartment rental in Medellin.

Plaza Botero features 23 of his larger-than-life sculptures donated by Fernando Botero to the city of Medellin. You'll find them sprinkled around the aptly named Plaza Botero (near the Parque Berrio metro station).

The Museum of Antioquia is located along the western edge of Plaza Botero and the second oldest museum in the country. It includes a wide spectrum of art from pre-Columbian Colombia right up to modern masters like Botero.

These futuristic cable cars soar above the city into the surrounding hills.

The Coffee Shops of El Poblado are interesting experience as Colombia is the world's third-largest coffee producer, and many of the beans come from the hills of Antioquia surrounding Medellin. The trendy El Poblado neighborhood is a hub of coffee culture and absolutely brimming with hip cafés grinding strong local roasts. Each of these cafés makes its own blends from regional beans and sells them by the bag for prices you're unlikely to find back home.

Comuna 13 was once the most dangerous neighborhood in Medellin. Now it's fast becoming one of the city's top tourist attractions wanting around the graffiti-filled streets. An area with ever-growing system of open-air escalators linking together Comuna 13's cliff-clinging communities. Many of the escalator operators are also the street artists who've livened up the edges of the escalator route with colourful murals that both reflect the neighborhood's tough past.

MAMM - Medellín Museum of Modern Art is located in the up-and-coming Ciudad del Rio neighborhood, a former industrial area along the Medellin River that has been gentrified in recent decades and is now home to artists' lofts, sculpture-filled gardens, and top-tier dining.

Barrio Manila is a green and chic, small barrio on the edge of El Poblado. Home to a number of fantastic accommodation options, Manila is also your go-to spot for some of the trendiest open-air restaurants in the city, including Tal Cual and Malevo (for chargrilled meats).

Medellin has a huge choice of great cafes and restaurants. Many are located in the El Poblado area which us main LGBTQ district so you will be spoilt for choice.

Some of the most typical local foods to try are as follows:

Ajiaco is a dish with a cultural reference to the cundiboyacense highlands. It is a soup prepared with chicken breasts, three different types of potatoes, cob and guascas (a spice), usually added milk cream and capers and accompanied by avocado slices.

Fritanga bogotana is a group of fried foods typical of the region. A plentiful chop with pork ribs, beef, chicharrón, usually accompanied by ají, chimichurri and guacamole.

The Colombian tamale is a corn dough paste with meat or chicken, chickpeas, carrots, and seasonings, wrapped in banana leaves and steamed.

Of course, no one can leave Colombia without tasting the ubiquitous "tinto" (100% Colombian coffee) and the coffee shops of El Poblado.

In Medellín you will quickly find the centre of gay life is in trendy EL Poblado around the Parque Lleras, but of course there are many, many other places you should explore in the city.

With nothing to hide, the LGBTQ tourist should understand that in Medellin there is a street full of stories and rhythms dedicated exclusively to LGBTq people. Barbacoas Street, located in the centre of the city, one block from the emblematic Parque Bolívar and behind the Metropolitan Cathedral that has been the backbone of Medellín's gay scene since the 1980s.

Outside of El Poblado, there are a handful of gay hangouts dotted around the city, particularly in the downtown area (called Candelaria) and Laureles.

Downtown (Candelaria) is a bit dodgy, especially at night and Laureles as more residential is safer.

BarChiquita is the hippest new-gay bar in Medellín, located in El Poblado with modern decor, kitschy art, killer cocktails and the freedom to be as queer as you feel. The staff are extremely friendly and cute. There is a large outdoor terrace to relax and enjoy your cocktail when weather permits. Open Wednesdays to Saturdays, from 6pm till 2 am.

Zero by Purple Club is located right in the heart of everything in Lleras Park, Poblado. A relatively small place that get packed out with cutes boys with cool Latino pop classic music. Open Thursday to Saturday from 10pm to 4am.

Industry Club is one of the most popular gay clubs in Poblado, with a focus on electronic music with 2 dance floors. Industry Club is open only on Friday and Saturday night from 10pm till 4am

Ink Bar 33 is located north of the Laureles neighbourhood, close to Viva gay club. A bar popular with a mix of tourists and locals. Themed events and 2-4-1 shot specials are popular. Open daily from 5pm - 4am.

Viva Discoteca is a huge club north of the Laureles neighbourhood which host a massive gay party for over 1,000 on Saturday evenings. It has 2 large dance floors with one playing salsa or other classic Latin styles and the other playing electronic music. The salsa playing dance area was nice to watch gay couples dancing salsa together. Viva is only open on Saturdays from 9pm to 4am.

Unlike many countries saunas in Medellin are very popular. Be aware that prostitution is legal in Colombia but only in designated tolerance zones. Rent boys are common in saunas in Colombia.

Barbacoas Bathhouse is located in the seedy/gay party area of Barbacoa. A clean, cheap and busy place full of Colombian men.

Club de Tobi is Medellin’s most well-known bathhouse popular with tourists. A chic atmosphere, with nice pool and plenty of lounging areas but with less action perhaps due to the chic nature.

Sauna Club 55 is a modern sophisticated popular sauna that closes at 9pm daily.

La Caverna Medellin is an unsafe sauna that should be avoided. Prostitution and illicit drug consumed onsite draws a lot of crime and police attention to guests.

There are plenty of modern shopping malls (“centro comerciales”) around Medellin. The most prominent being El Tesoro, Oviedo, and the newest Santa Fe. All are conveniently located in Poblado.

Medellín Pride in June\July offers a true Latin style street party for all the Medellin LGBTQ community to make a show of culture, solidarity and equality. The parade is part of a month-long Festival Antioquia Vive Diversa (Festival of Diversity), which culminates in the Pride parade through the city. There are numerous parties and events taking place throughout the month. Medellin's Pride parade is popular with almost the entire city takes part,

Colombia’s Fashion Week is one of Medellín’s biggest annual events held annually in July where over 50,000 people fly from all over the world to attend what is said to be Latin America’s finest display of fashion.

Festival Internacional de Tango held annual in June is a five-day Tango festival in Medellin, with many artistic, cultural and academic activities taking place throughout the city. One of the best things about this festival is that it is very diverse and inclusive, as well as being free!

The Flamenco Festival held annual in October for flamenco dancing. This is also the only flamenco festival that takes place in the whole of Colombia.