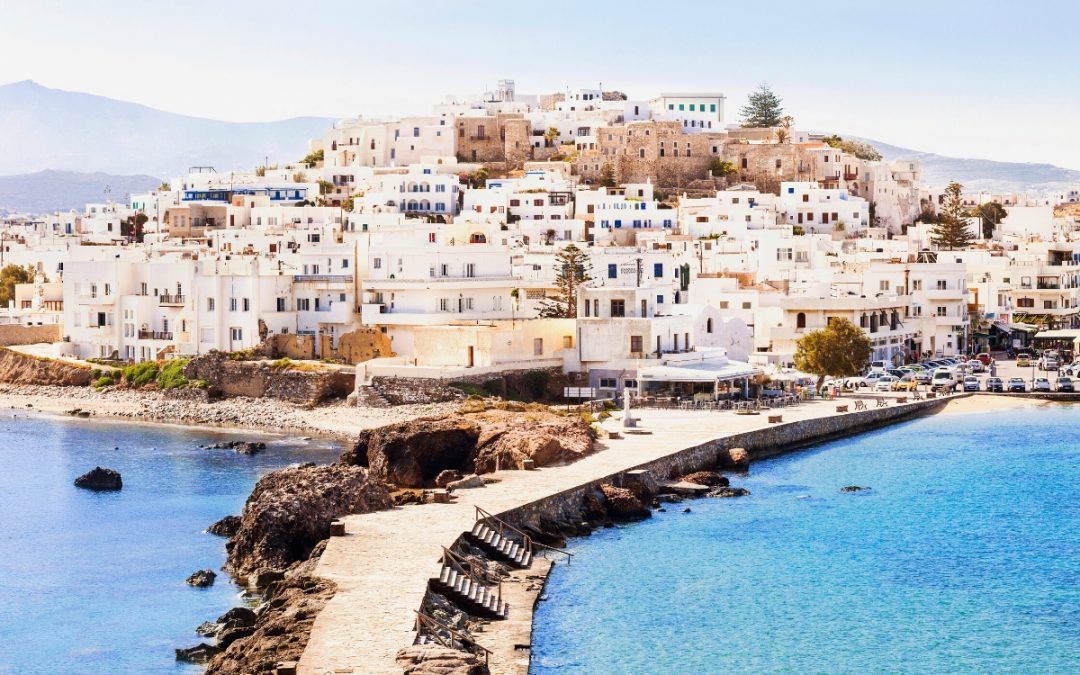 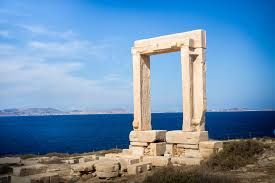 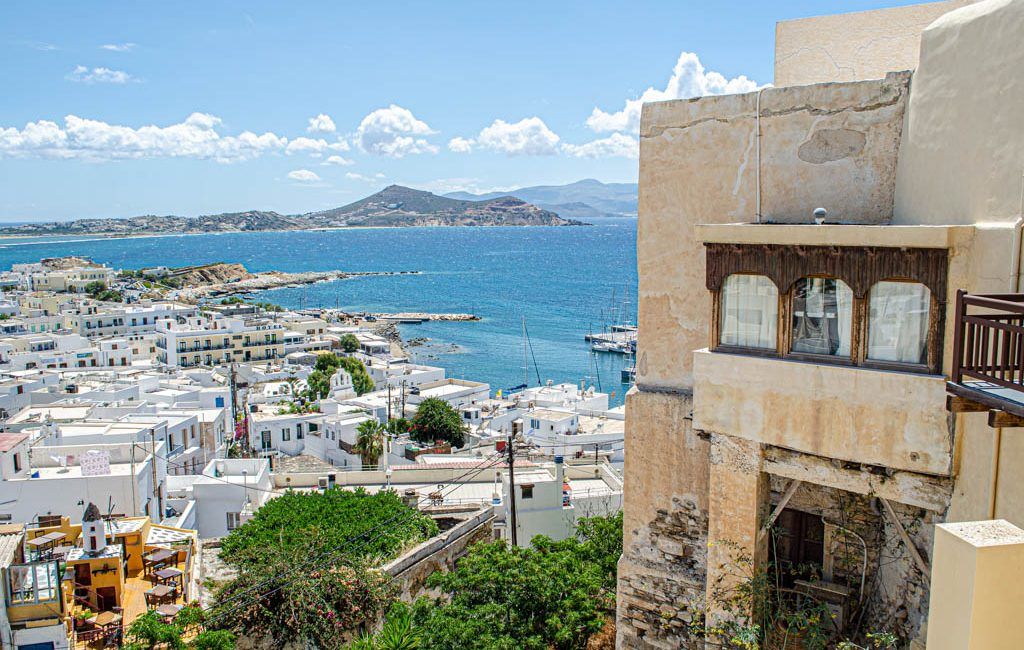 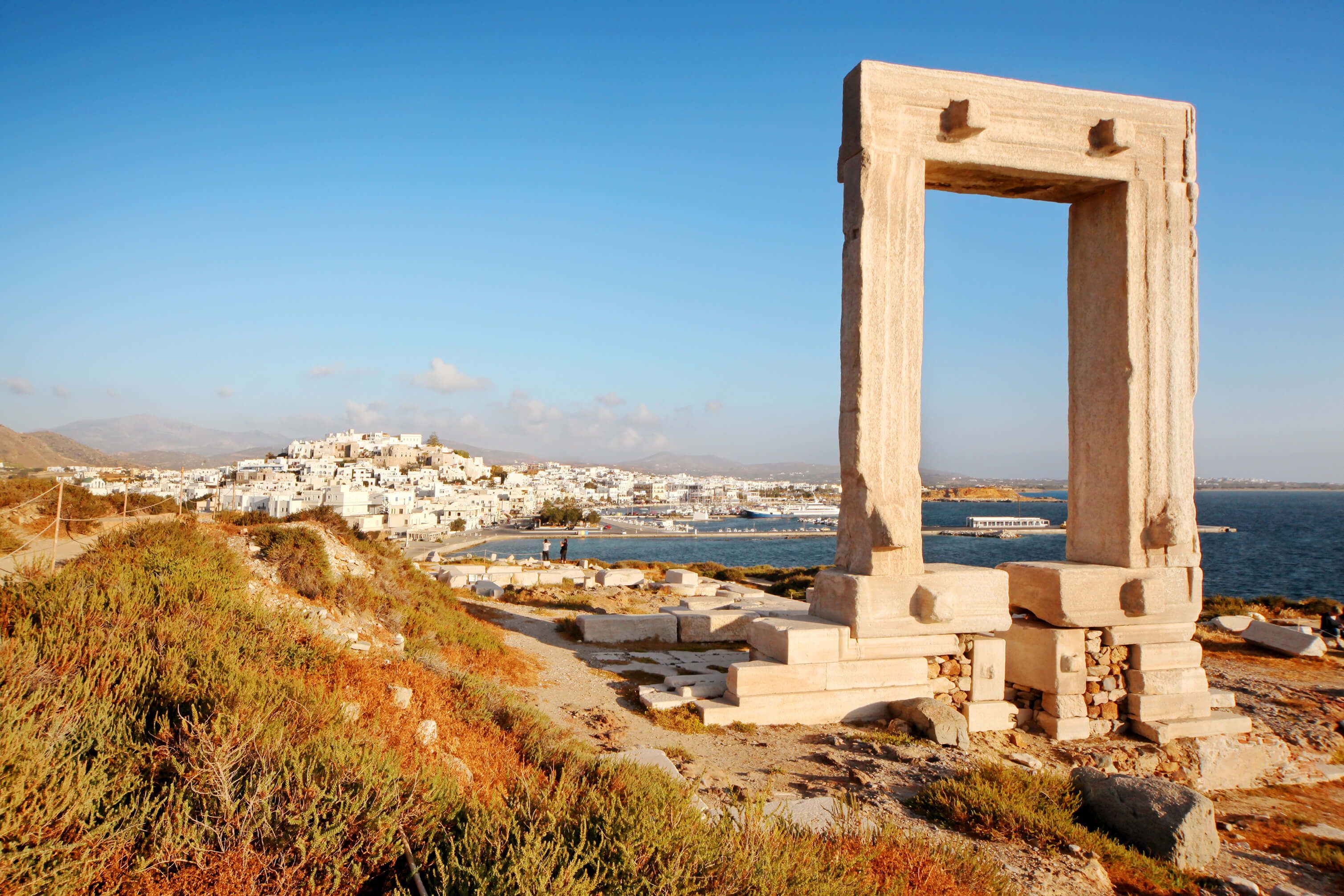 Naxos the largest Cyclades Island and growing in popularity with LGBTQ community.

As the largest of the Cyclades islands with mountain villages, ancient ruins and long stretches of beach is it popular with Greek community. A more authentic Greek island than the trendy islands of Mykonos and Santorini, growing in popularity every year with LGBTQ community.

The capital Chora is a port town filled with whitewashed, cube-shaped houses and medieval Venetian mansions.

The island is a considered a gay friendly destination and attracts a lot of tourists who are gay in recent years.

From Naxos town where ferries arrive these is a taxi rank and the main bus station.

Getting around is easier with local buses if timetable suits your agenda or a local taxi. Hiring a moped is more relaxed than many of the other island as traffic is less busy except at the time when the ferries are arriving or departing when everybody seems to, he heading in same direction.

Naxos Town, also called Chora, is the largest village on the island. Like most of the Cycladic Island villages, Naxos Town is built like a maze with narrow, crisscrossing footpaths and walkways packed with shops and centuries-old Orthodox chapels. The village spreads down the sides of a hill topped with the ruins of a 13th-century Venetian castle a few minutes’ walk, from the city centre.

Chora has promenade of bars, cafés, restaurants and shops open late into the night. Typically, this area or surrounding streets for tourists visiting to stroll and find somewhere for dinner in the busy restaurants.

Majority of local nightlife centres around Naxos town or the bars and restaurants which are close to many of the hotels in villages. Naxos is a place to relax and unwind rather than look for late night clubs. There is one bar along the promenade in Naxos Town popular with LGBTQ community. Look up as one first floor for the rainbow flag.

Agia Anna, Agios Prokopios Mikri Vigla and Plaka, are most popular beaches all Chora. Naxos is also popular for windsurfing, as well as kitesurfing as well as having several sports clubs that offer both of these sports and other water activities.

Agia Anna and Agios Prokopios are two adjacent beaches south of Stelida, facing southeast and shielded from the wind. Both beaches have calm, turquoise water, golden sand, a variety of restaurants, and fun beach clubs.

Mikri Vigla is a headland on the southwest side of Naxos. Mikri Vigla Beach faces north toward the wind and therefore a popular beach for windsurfing and kitesurfing.

Plaka Beach is the longest on Naxos, at just over 4 km long. Known for its soft, golden sand and gentle water and considered the best beach in Naxos and among the best in Greece.

Naxos Town has the highest number of attractions all within short walking distance of each other include castle ruins, Apollo Temple ruins (the Portara), sunsets over the port, and Old Market Street.

There are the mountain villages, closer to the Temple of Demeter ruins, over 200 Byzantine churches, and Zas Cave, the mythological home of Zeus for those interested in hiking.

Majority of tourist visit Naxos to enjoy a laidback beach holiday and to enjoy local cuisine.

The majority of the shopping on the island is in Naxos town with many small boutiques selling fashion items, swim wear as well as locally made product and foodstuffs as well as varieties of limoncello and other Greek liquors.