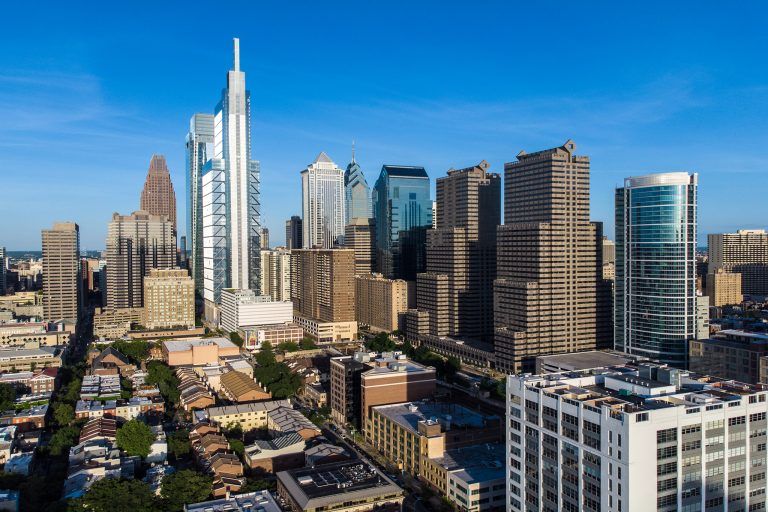 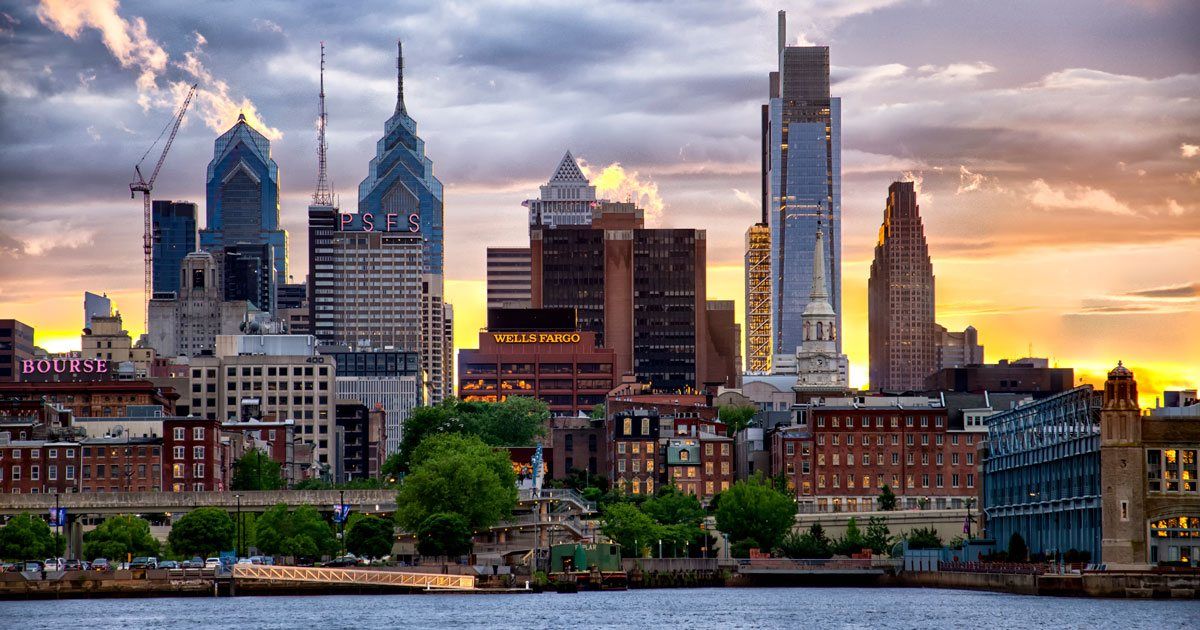 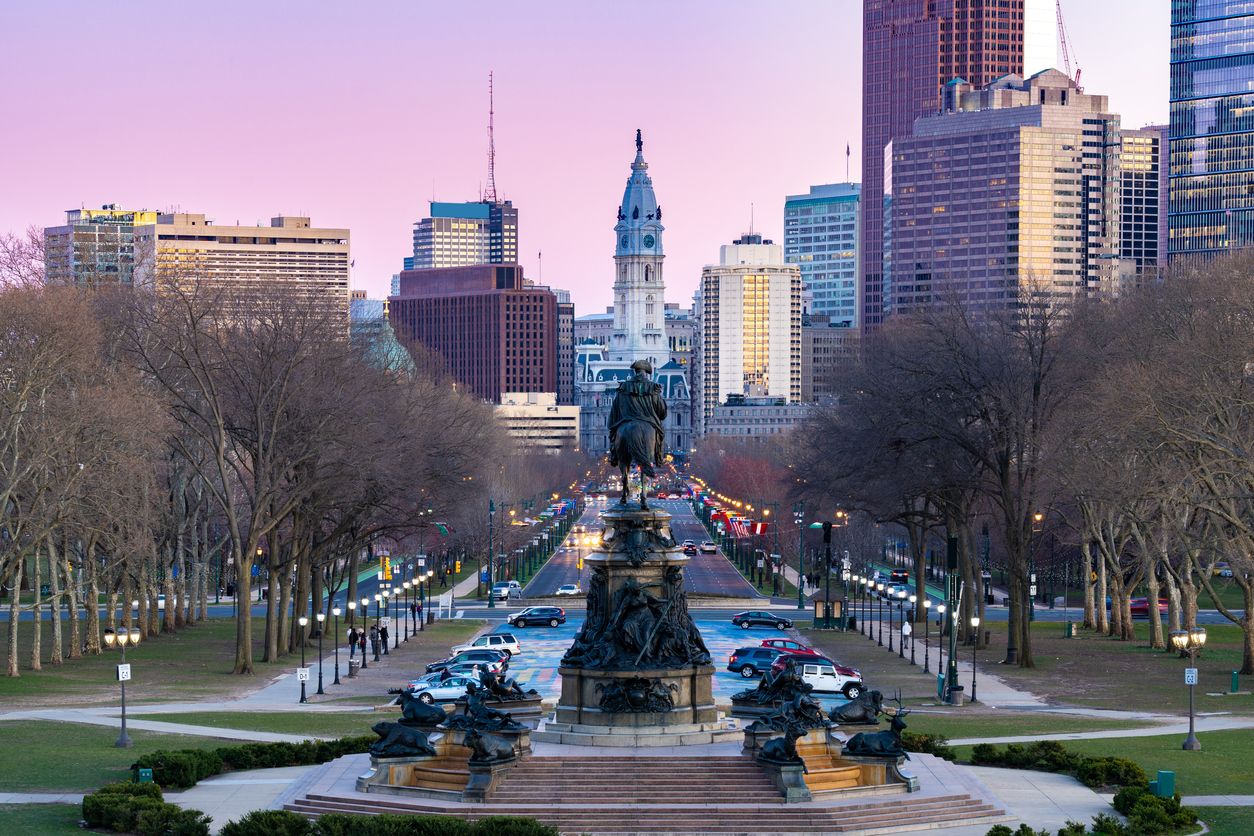 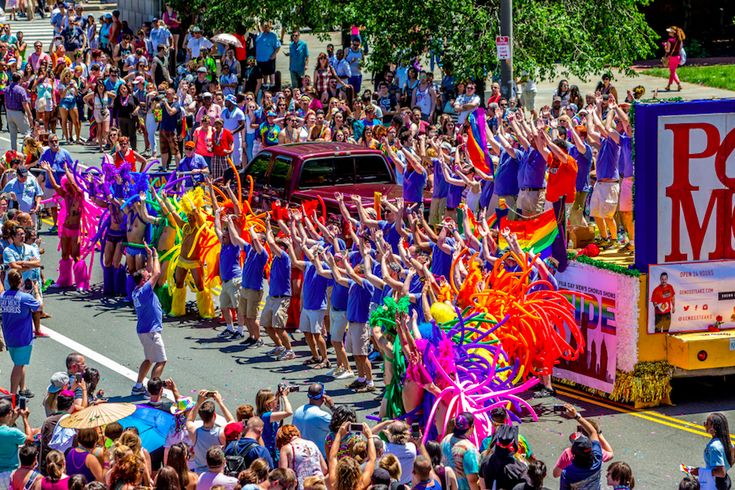 Philadelphia is one of the USA’s most LGBTQ-friendly cities with a long history of tolerance.

Philadelphia was founded in 1682 by William Penn, an English Quaker. The city remained the nation's largest city until 1790, when it was surpassed by New York City. It served as the nation's first capital from May 10, 1775 until December 12, 1776 and on four occasions during and following the American Revolution

Philadelphia, often called Philly, is now the sixth largest city in the U.S. The city established its LGBTQ credentials by holding a LGBTQ rights demonstration outside Independence Hall on July 4, 1965. Today the city is considered as an open-minded welcoming place to visit for LGBTQ travellers.

The rainbow street crossings, street signs, and flags give the city its queer credentials, along with many restaurants, stores, and bars supporting LGBTQ-identified clientele.

Philadelphia International Airport (PHL) is 11 km south-southwest of city centre. The best option for travel between Philadelphia International Airport and City Centre Regional Rail's Airport Line Service, which stops at most airport terminals. The distance between Philadelphia Airport (PHL) and City Centre is 11 km with departures every 30 minutes and journey time of 25 minutes. There is a bus service but typically takes around 40 minutes depending on traffic.

The best way to get around Philadelphia is by foot or PHLASH bus. Almost all attractions are centred in the Old City, Rittenhouse Square and Society Hill areas which are easily reached on foot.

The Liberty bell located at the Liberty Bell Pavilion has long been a symbol of freedom and independence in the United States. The history of the bell along with some short film shows how abolitionists, suffragists, and other groups adopted the bell as a symbol of freedom. In the late 1800s, the bell was transported around the country in an effort to conquer divisions left by the Civil War. The bell completed this journey in Philadelphia in 1915 and has remained in ever since.

Independence National Historical Park is possibly America's most historic square mile. In addition to housing famous sites, such as Independence Hall and the Liberty Bell, many other important attractions line the cobbled streets of this old area.

On its east side, at 55 North 5th Street, is the National Museum of American Jewish History. The park is also home to the Ben Franklin Museum, which has a collection of exhibits dedicated to celebrating this revolutionary inventor's many remarkable qualities.

Reading Terminal Market has been a National Historic Landmark since 1995. It has been in operation since 1893. The old market has undergone renovations where today, you will find more than 80 merchants, 75 of whom are small independent businesses. Popular with locals and tourists come to buy local produce; free-range meats; canned goods; fresh-baked Amish breads; Pennsylvania Dutch foods and handmade crafts, including clothing and gifts.

Love Park is possibly Philadelphia's most photographed statue. The Robert Indiana's iconic LOVE sculpture, was installed in John F. Kennedy Plaza for the America's Bicentennial celebration in 1976. The plaza, now known as LOVE Park, marks the entrance to Philadelphia's Museum Mile, the Benjamin Franklin Parkway, where you'll find the Barnes Foundation, The Franklin Institute, and the Philadelphia Museum of Art.

This Fine Arts Museum features a collection of American Art from the 18th, 19th, and 20th centuries, including works by early American artists right through to Andy Warhol. It is housed in a National Historic Landmark building designed by American architects Frank Furness and George W. Hewitt.

Philadelphia's City Hall is the United States' largest municipal building. Built on a foundation of solid granite, the building supports a 548-foot tower, which is the world's tallest masonry structure lacking a steel frame. At the top of the tower sits a 27-ton statue of William Penn whom founded the city.

Gay Philadelphia is mostly centered in the gayborhood from Chestnut to Pine Street, between 11th and Broad streets.

Philadelphia has bars for everyone, from dance freaks to leather daddies, sports fans, and drag aficionados.

The LGBTQ community in Philadelphia is a highly visible and an important part of the cities’ identity. There are many clubs, bars, lounges, bookstores, boutiques, restaurants and shops in the Gayborhood, a section of Centre City’s Washington Square District. Eat at an LGBTQ-owned restaurant in the Gayborhood and snap a photo by one of Philadelphia’s LGBTQ+ murals, including Mural Arts Philadelphia’s Pride.

Depending on your mood, you can find relaxed cocktails in an upscale bar to an all-night dance party surrounded by your LGBTQ family. There is also plenty of cruise/dive bars, sexy go-go boys and queer events to enjoy.

Most gay bars and clubs start to get busy around 10 pm and go until into the early morning with one after-hours club.

Woodys is Philadelphia iconic LGBTQ bar & dance club for over 40 years on 13th Street. A high-energy melting club, especially on Saturday nights, where there are five rooms, each with unique vibes and their own DJs pumping out tunes. The weekday Happy Hour with food and drink specials from 5–8 pm, along with themed events and drag shows keep the place buzzing.

Bike Stop is Philadelphia’s Leather Bar since 1982, offering four floors of fun with each having different ambience. At weekends leather and Levi lovers congregate on the cruisey first floor or head to the second-floor sports. On the 3rd floor these is a small dance club with bar and shirtless bartenders. For the kinkier or more curious, head downstairs to the infamous Pit Stop basement. Remember “No Sneakers & No Cologne” is rule if you want to visit the Pit Stop.

Knock is another bar produced by the famous Woody’s is an upscale cocktailing & New American dining spot. LGBTQ-friendly, Knock is a fashionable restaurant by day and trendy lounge after 11pm.

Tavern on Camac is an all in on gay venue with piano bar, tavern, and nightclub. The TOC piano bar is open daily from 4pm until 2am and well known for the nightly piano bar singalongs, sensational performances, and great drinks. In the Tavern area is a cosy restaurant serving fresh American bar food and local beers. At the top of the venue is the nightclub hosting late-night weekend dance parties with cocktails from 9pm until 2am.

U Bar is a sociable gay bar on the busy corner of 13th and Locus with fabulous floor-to-ceiling windows facing out to the Street. A relaxed bar serving a range of craft & imported beers on tap. The music and vibe is nice place to chill and chat with the local customers.

Tabu Lounge & Sports Bar is a gay sports bar. Tabu open since 2010, is great place for gay sports fan to hang out while watching sports channels. There is a spacious covered deck bar, intimate cabaret venue, and a late-night dance floor.

Club Philly is the most popular gay sauna including a gym, steam room, open showers, and VIP rooms. Gay-owned and operated, Club Philly host regular theme nights, which tend to be popular.

Sansom Street Gym as the suggests is a gym, but you are far more likely to get a workout of a totally different kind here. A gay cruise club offering a basic fitness centre, steam room, private cabins, open showers, and play spaces.

Philadelphia with a great, state-wide law that keeps clothing and shoes tax-free, is the perfect destination for those looking to spend the day shopping.

Over the years, the rectangular section of city centre between 11th and Broad streets, and Market and Spruce streets, has been divvied up and called different things by developers and realtors.

Commonly referred to as Midtown Village serves as great place to shop and have lunch.

Each year the city is host to many highly visible and important events, such as Equality Forum, Blue Ball, Pride Parade and OutFest, the largest National Coming Out Day festival in the world.

QFLIX Philadelphia is an Independent LGBTQ+ film festival screening films from around the world.

Philadelphia Black Pride celebration is typically held at the end of April.

Pride Day LGBTQ+ Parade and Festival take place in June with the festive parade, from the Gayborhood to Penn’s Landing.

OutFest celebrates National Coming Out Day with a block party and street festival, annually in October.

Bears at the Woods held in May is a camping event for bears, cubs, otters etc at a LGBTQ camping resort, exclusively for the 18-and-older crowd. Located on 161 private acres with streams, a four-acre lake, and spacious campsites, this queer resort hosts one hell of a beer weekend.

Philly Trans March held in October is an annual protest against the hate, social injustice, and inequity faced by trans, non-binary, and genderqueer individuals and communities.