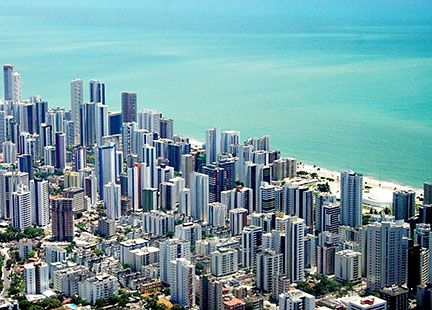 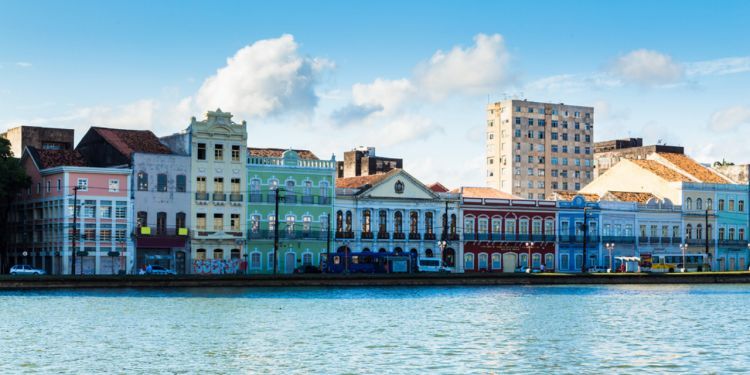 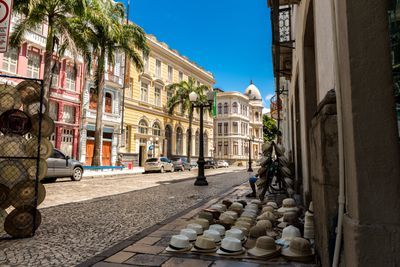 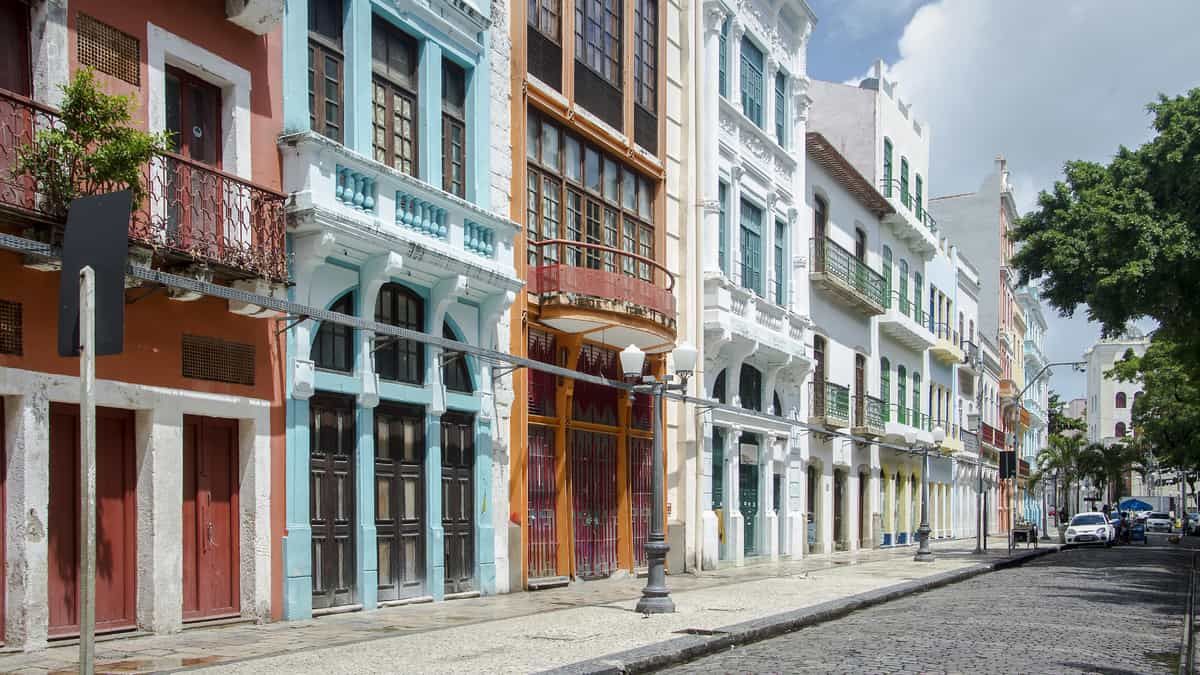 Recife is the capital of the state of Pernambuco founded in 1537 by the Portuguese.

Recife is a beautiful city in Brazil overlooking the sea of Pernambuco, a state considered the flagship for tourism with an almost constant 35°C temperature of its beaches and the emerald green of the sea.

Recife is a city of contrasts, where the ancient joins the modern. The different nationalities of the Portuguese, Spanish, Dutch and French colonies have all left their mark in the city, including museums, fortresses, bridges, monuments and neoclassical buildings. Built on canals crossed by bridges, it is often called the Venice of Brazil.

As a result of the stone reefs around the area, Recife got its name. A major producer of sugar cane in the region, it became an important trading port.

Recife is also a major tourist destination due to the marvellous beaches. A paradise for sun, sea and sand worshippers. The beach Porto de Galinhas located 60 kms south of Recife has repeatedly won the title of best beach in Brazil award.

Lesbian, gay, bisexual, transgender and queer (LGBTQ) rights in Brazil are among the most advanced in Latin America and the world.

Gay couples in Brazil enjoy the same rights guaranteed to heterosexual ones since 16 May 2013, including marriage. In June 2019, the Brazilian Supreme Court ruled that discrimination on the basis of sexual orientation and gender identity is a crime the same as racism.

The status of LGBTQ rights in Brazil has grown since the end of the military dictatorship in 1985, and the creation of the new Constitution of Brazil of 1988.

Generally, with the world’s largest gay pride event in Sao Paulo and carnival which is popular in every city the Brazilian popular are generally open minded towards LGBTQ community.

Guararapes -Gilberto Freyre Airport (REC) is the airport serving the port city of Recife and is located 14km from the city centre of Recife. Arrivals and departures from Guararapes airport are mostly domestic, with only a few international flights.

Buses is the cheapest option for getting to Recife centre. A couple of bus lines operate from Guararapes airport to the city centre and other neighbourhoods.

Bus numbers 33 and 42 take you to the popular Praia de Boa Viagem in around 15 minutes, and to the historic centre in 30 minutes. Other bus lines number 152 (Jordão de Baixo), bus number 153 (Brigadeiro Ivo Borges) and 163 (Cajueiro Seco) operate to different parts of the city departing every 20-30 minutes generally from 4:00 am to 11:50 pm.

There is a metro station as the airport connected to the terminals via a footbridge. The Blue metro line operates from 5:00 am to 11:00 pm departing every 8-10 minutes.

There are 2 taxi companies operating from the airport. “Táxi Especial” or “Táxi Aeroporto” are authorized airport taxis operating from outside the Arrivals terminal.  They are however, more expensive compared to the “Táxi comum”, which is the ordinary taxis.

Uber is also available at the airport.

Whilst there are widespread municipal city buses around the Recife metropolitan region, they can get very crowded in peak hours and many do not have air-conditioning.

For more comfort, look for the 'Opcional' buses which are air-conditioned, more comfortable, and a little more expensive than the common buses. They operate on a number of routes around Recife.

Old Recife located on the Island of Recife, near the Recife harbour is where the Portuguese first settled at the beginning of the 16th century. Recife Antigo (Old Recife) is the historic centre of the city and home to Praça Rio Branco, and Rua do Bom Jesus, two of the oldest and most typical sites in Recife. Old Recife also houses beautiful churches, convents and colonial buildings. In the south of the island, many museums and restaurants dot the old streets of the city centre. Although there are only a few hotels in Recife Antigo, this area is an excellent place to stay, allowing you to explore the authentic heart of the city while being close to everything.

The city of Boa Viagem, located south of Recife’s city centre, integrated into the greater metropolitan area of Recife, attracts well-heeled Brazilians and trendy young people. Accommodation rates in Boa Viagem are higher than in the north, but the area is highly attractive, mainly thanks to its 7-kilometre strip of golden sandy beach. The coastline is protected by reefs, but at low tide, you can swim in warm natural pools.

Visit Olinda to wander around cobblestone streets lined with houses and little cafes. Olinda is arguably the most colourful small town in all of Brazil. The area if full of cafes, restaurants, and small shops. There are often markets happening around Olinda as well as street performers. Be sure to also visit the beautiful Se Cathedral. Whilst in Olinda, walk to the viewpoint called Alto Da Se. Here, there is a viewing platform that offers visitors the chance to see all of Olinda and Recife and view the unique contrast between the old colonial streets of Olinda and the skyscrapers in Recife. You can take a local bus to Olinda to visit for a day.

Hangout on Boa Viagem boardwalk and visit the beach. You can visit some of the beachside restaurants and relax. It is widely known in Brazil that Recife has a lot of sharks in the ocean, so many that most Brazilians will not swim here.

For those who love to shop, Recife is the place to be! In Recife, you can visit large shopping malls that have fancier shops, brand names, and luxury stores that you probably wouldn’t expect to see in Brazil. The most popular shopping complex in Recife is Shopping Rio Mar.

Explore the “Brazilian Caribbean” at Maragogi Beach only a short drive from Recife. The town of Maragogi is a tourist destination of its own, and people from all over the world book luxurious hotels or guesthouses here to enjoy some of the best beaches in all of Brazil. There are not sharks at Maragogi as the reef protects the beach and keeps sharks out. At Maragogi, the sand is fine and white and the water is crystal clear.

Visit Praia dos Carneiros which offers views of palm trees, warm water, and fine white sand. Like the other beaches around Recife, you can swim safely here and snorkel with lots of fish. This beach is also much less touristic and built up than the others near Recife. Praia dos Carneiros is located about an hour and a half from Recife making it possible to visit for the day if you leave after an early breakfast.

The stretch of sand between Hotel Savaroni and Edificio Acaiaca is the gay section of Praia de Boa Viagem. Generally, people arrive from 10:00 am onwards and only leave at the end of the afternoon or later. The crowd is a mixture of male, female, rich, poor, muscled and chubby. Everybody just enjoys the sun and sand while relaxing with the LGBTQ community.

The LGBTQ neighbourhood of Recife is Boa Vista with most of the gay bars on Rua das Ninfas or Av. Manoel Borba and it's easy for you to go there and meet everyone. It is “the” neighbourhood to hang out in the city.

Conchittas Bar open Tuesday to Sundays is a cute bar with pleasant atmosphere with regular DJ playing to a very diverse audience of gays and lesbians, of all ages. There are snacks if you want to eat something. The crowd occupies the tables and also the sidewalk in front. Address: Av. Manoel Borba, 709

On the same street as Conchittas, a little further on, is Amigos do Pop Bar. A karaoke place where you can sing along and sing with your friends. If you like karaoke, Amigos do Pop is your place! Address: Av. Manoel Borba, 786.

PajuBar is a place to go for snacks, have some good drinks or a very cold beer, with a big and nice balcony. Inside there's an air-conditioned space that turns into a dance floor with a DJ. Open daily from 6:00 pm. Address : Av Manoel Borba, 693.

IRAQ Club is an interesting underground club. Check out there social media posts to see the parties! Happy Hour starts at 6:00 pm and the party goes on well into the night. Address: Rua do Sossego, 179.

Thermas Boa Vista is the most popular gay sauna in Recife. There is bar, cafe, internet access, steam room, massage, sauna, relaxing cabins and dark. In addition to regular customers there are some escorts whom visit the sauna. Rua Manoel Pereira, 53. Open daily Monday to Thursday from 3:00 pm to 11:00 pm and Friday to Sunday from 3:00 pm to 6:00 am.

Carnival in Brazil is popular with most Brazilians held annually at the end of February or early March depending on the dates for Easter is popular with the LGBTQ community.

The annual gay pride event in Recife is held in September.