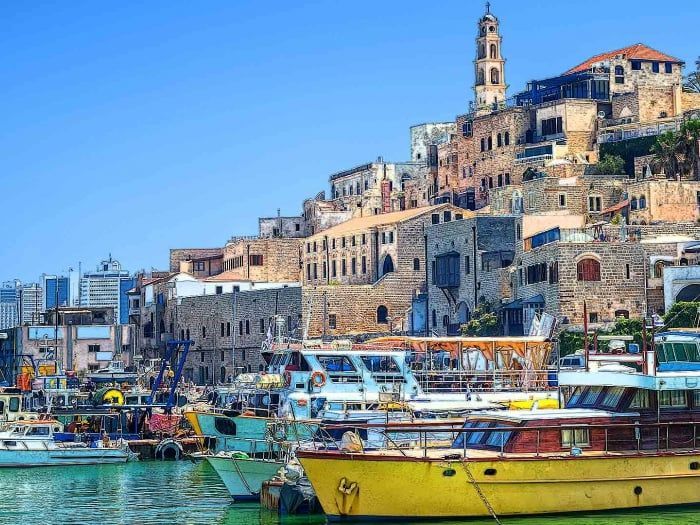 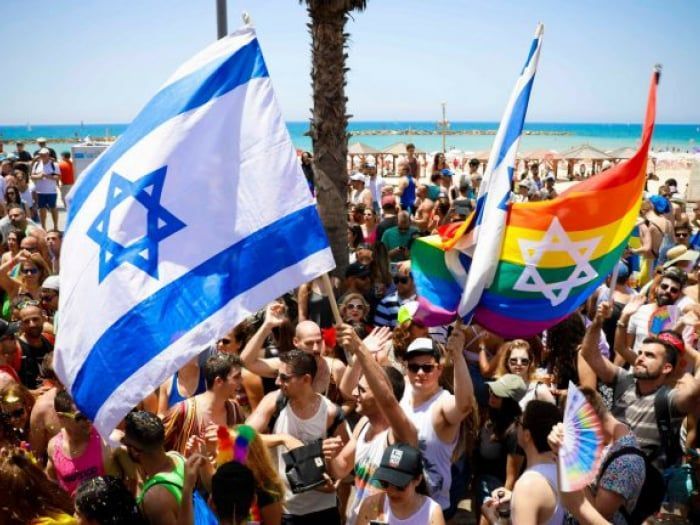 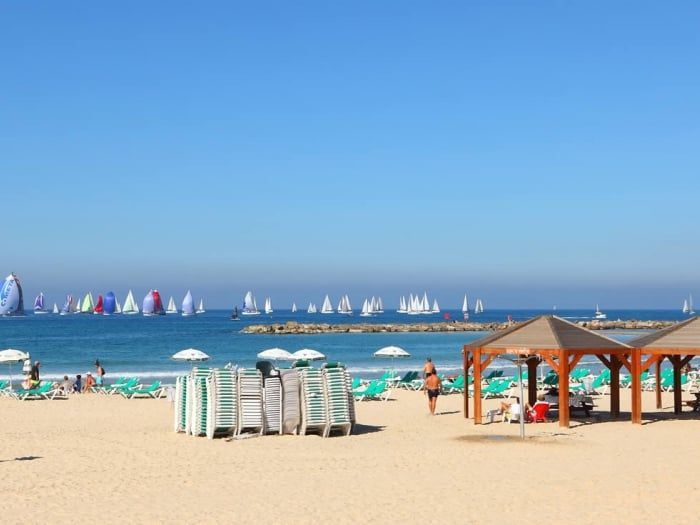 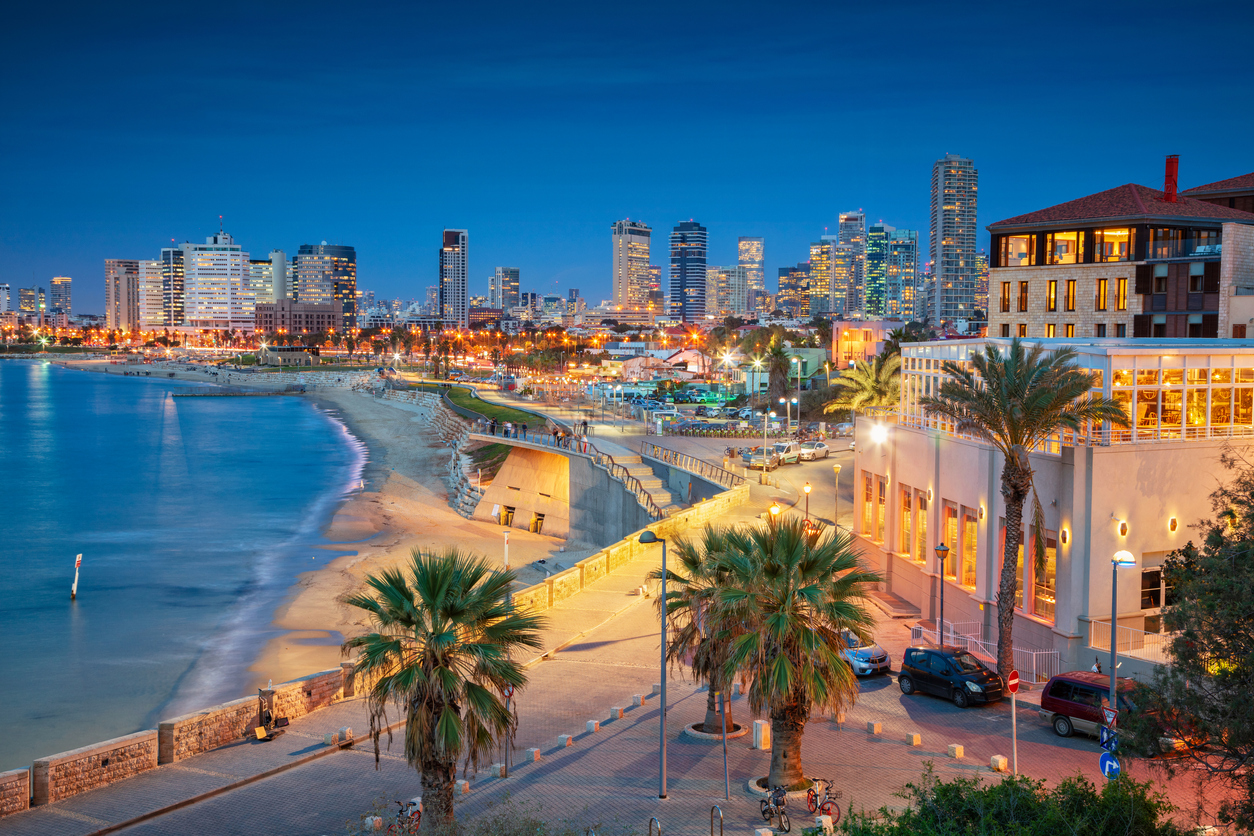 A city with young open-minded population despite Jewish religion. A great gay pride event that is among best in world.

Tel Aviv is the 2nd most populate city in Israel after Jerusalem and an increasing population of approximately 450,000.

The city was founded in 1909 by Jews as a modern housing estate on the outskirts of the city of Jaffa. Then part of the Jerusalem proving of the Ottoman Palestine. It was called Ahlizat Bayit which means “Building Houses”.

The name was then changed to Tel Aviv which means “Ancient Hill of the spring”.

Immigration by mostly Jewish refugees contributed to the growth of Tel Aviv much faster than Jaffa. Jaffa was as a result merged into Tel Aviv in 1950.

The city is a place where a mix of different religions and culture work generally very well. In Tel Aviv there are Atheists, Arabs, Christians and Jews all living together relatively peacefully.

This tolerance of each other is why the city is considered very liberal and an attractive place to live for the gay community. The majority of the population are young and open minded.

This liberal attitude has contributed to the vibrant culture of the city and now Tel Aviv is considered one of the best LGBT cities in the Middle East. It has a large gay population. The gay culture in Tel Aviv for single guys and gay couple with their own children works very well.

Tel Aviv has a highly developed public transport but is geared more towards locals rather than for tourists. Generally, if you stay in the centre of Tel Aviv you can walk to most of the places you will visit as the city is flat and compact.

The cheapest way from the airport to city centre is to take the train from terminal 3 which takes approximately 20 minutes. This train does not operate from during Shabbat (Friday afternoon until Saturday evening) or on the main Jewish holidays. Then you would need to catch a bus or take a taxi which will cost the equivalent of about €35.

Tel Aviv has a couple of exclusively gay guest houses and a number of gay friendly hotels. As the city is relatively compact it would be best to stay in either Florentine or Neve Tzedek neighbourhoods as you will close to the gay scene.

Tel Aviv doesn’t specifically have a specific gay neighbourhood but in areas of Florentine or Neve Tzedek you will find lots of the local gay community hangout.

The majority of gay visitor to Tel Aviv are visiting for the annual gay pride, beaches and night life but the city has interested places to visit.

Carmel Market is a local market selling arts, crafts, local fruits &vegetables, spices and tourist souvenir. It has the impression of a traditional Middle Eastern market. In the streets surround the market there are lot of small cafes, restaurants and shops too.

Jaffa Old Town is another area to explore which can be reach by walking along the Tel Aviv beach to the left. It a nice walk if the weather is good and a great way to see the whole beach along the way. This area has some historical significance as data back around 5,000 years and there are numerous art galleries, restaurants, hip bars to visit. There is a flea market as well with lots of street vendors selling free juice and snack to temp you.

Tel Aviv port is along by the sea past Hilton beach which is the main gay beach close to the Hilton hotel and an area with lots of cafes, restaurants and clothes stores and a small market.

The main gay beach is called Hilton Beach simply because it is almost in front of the Hilton hotel. It is actually on the right-hand side of the Hilton hotel if you are facing the sea. Just look for the rainbow flags and groups of guys together.

It is popular with local and tourists with a bar and restaurant so you just need your swim wear, towel, sun tan lotion and some shekels to enjoy the atmosphere.

Tel Aviv being every gay friendly is full of cafes, bars and juice bars for the local Israeli residents and tourists in town to enjoy. These are some of the most popular bars and clubs to hang out.

Arisa is a large monthly club with ‘Mizrachi’ music held at Haoman 17.

FFF Shirazi is a twice a month themed parties with 2 dance floor that attracts a cute crowd of locals and tourist.

Kuli Alma is a trendy underground bar with outdoor lounging, indoor dancing and the ever-changing pictures.

Shpagat is a tiered bar located on Nahalat Binyamin Street where you can enjoy a drink with friends and people watch from different levels as guys cruise up and down the street.

Tel-A-Beef is a male group for bears, masculine kinky guys and all kind of other fetish guys that run different events under the BEEF branding. BEEFster is the weekly cruising and dance bar event and a monthly party called BEEFJerky. Then a couple of times a year they run BEEF Xtreme which is a sexual kinky party.

Tel Avis is a city of café and restaurant and many with terraces due to be nice climate most of the year. The typical foods are hummus, falafel, salad and fish or meat and a generally healthy diet.

Just look with your eyes and sense of smell at the restaurants and cafes to find a place to dine where you like the look of the food or the local guys eating there.

For shopping there are lots of small nice boutiques around Allenby and the side streets in this area. Just wander around and you will find most of the brands you have at home at generally good prices when you convert the local prices from Shekels to your own currency.

The main LGBT event in Tel Aviv is the annual gay pride held in June. This event is popular with the Israeli gay community and the locals of this city. It’s one of the largest events in Tel Aviv and one that has put Israel and the city on the gay map. Even though Israel is generally considered a religious country the event works well with the mix of foreigners and locals celebrating pride together. Around 200,000 attend the gay pride and is an important symbol of the countries open minded spirit.

Jerusalem is not to be missed if you are in Israel. Jerusalem is the most important historic and religious part of Israel. It is well worth a full day trip from Tel Aviv and best to arrange a day tour with one of the travel agents in the city or ask at your hotel for information. It is the most popular place in Israel outside of Tel Aviv to visit.

Caesera is an ancient Roman city about 1 hour from Tel Aviv. A half day or full day tour can be book via a travel agent or ask for information at your hotel.

The Dead Sea which is very salty so you can float on top and where they have mud you can cover yourself in and shower off to exfoliate your body is a nice experience. Ask at a travel agent or at your hotel for information on the tours available.